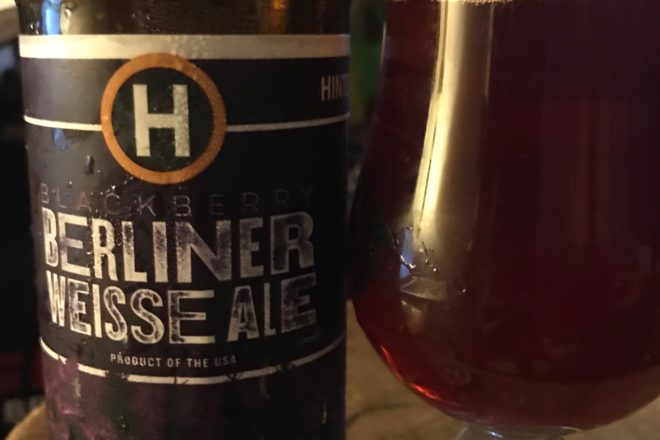 This one has been calling to me for some time: Blackberry Berliner Weisse Ale from Hinterland Brewing of Green Bay.

I do love blackberries in beer, and I do love the sour Berliner Weisse, so this should be a match made in heaven.

The Hinterland website suggests it would pair well with aged cheese, rich sausage and cheesecake. Because I had no wealthy sausages, aged cheese or cheesecake, I drank this tasty beer with a lemony tahini sauce over cucumber noodles. I might have overdone the garlic in the tahini sauce, but this beautiful, sour blackberry beer tamped the garlic burn down immediately. So there’s that – and a very good thing indeed.

According to the website, this limited-release 3.5 percent beer is brewed with 2-row malt, wheat and rice hulls. Providing the very low international bittering units of 5 are what the website calls Flaconer’s Flight hops. Of course it means Falconer’s Flight, a hop that debuted in 2010. It’s a proprietary blend of seven “C” hops: Cascade, Centennial, Chinook, Citra, Cluster, Columbus and Crystal, as well as several experimental varieties developed by Hopunion.

This style of sour beer has been around since at least the 16th century. Traditionally, the sourness was tamped down by adding either a red-raspberry syrup or a green-woodruff syrup.

With Hinterland’s version – and really, with any Berliner Weisse I’ve had during the 21st century – the addition of syrup is not necessary. Bring on the sour, puss!

Berliner Weisse was a very popular 19th-century drink in Germany, with more than 700 breweries producing it. By the end of the 20th century, however, only two German breweries were still making the style.

So let us thank the craft-beer evolution/revolution for bringing this magnificent, sour style back to the masses. And yes, please hold the raspberry and woodruff syrup. I’ll take mine straight.