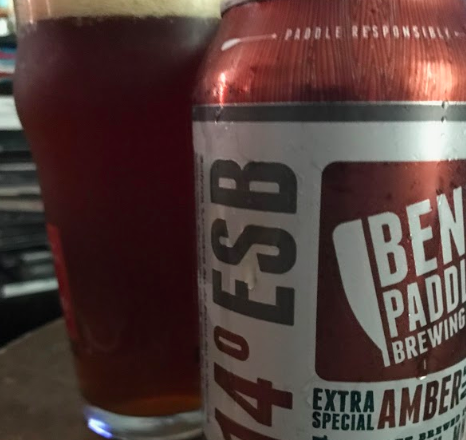 My local grocery store suddenly began to sell Bent Paddle beers from my hometown, Duluth. I immediately picked up a sixer of 14° ESB.

I love this beer. It makes me feel like I’m back in the village of Bicker, Lincolnshire, England, sitting at the White Swan Pub, drinking a delicious, malty pint of Extra Special Bitter.

First, it’s a beautiful, deep amber-colored beer with a healthy, white head that paints the side of the glass with lacing all the way to the end.

Yes, this is a great beer. It makes me want to dip into some other Bent Paddle styles.

So I move on to Trampled, an American golden ale that the can’s label claims is a “hometown collaboration with [the band] Trampled by Turtles.”

It certainly is golden, topped with a soft, white head. It’s a soft and mellow, 4.6 percent golden ale that seems like it would be perfect for drinking at an outdoor summer concert. It also has a great mouthfeel that makes you want to take another sip. Yum!

And that brings me to Venture Pils, Bent Paddle’s 5 percent lager. It’s a very light-colored lager with a hop finish that reminds me more of a German pilsner than a Czech pilsner. The Czech pils has a softer feel than its German counterpart.

However, this is a very tasty, quaffable lager. There’s some sweet breadiness from the malt (pilsner, 2-row and Carafoam for head retention), followed by a slightly citrus hop bite (Sterling, Saaz and German Tradition, which is also known as Hallertauer Tradition).

So glad to have Bent Paddle available where I live, but I also look forward to visiting the brewery upon my next visit to Duluth for a fresh glass of 14° ESB.