The first thing I wondered when I saw this four pack is why would anyone name a kolsch-style ale Oddball?

But, then, kolsch is an oddball beer, a hybrid. Kolsch is an ale that is cold lagered, making it as about as close to a lager as an ale will ever get.

It was born in Cologne, Germany, sort of that city’s answer to Dusseldorf’s alt beer, which is another example of cold-lagered ale, although it is darker than golden kolsch, more of a coppery color.

Kolsch is so associated with Cologne that when the style is brewed outside of that city, it is referred to as “kolsch-style,” as MobCraft of Milwaukee has done here with Oddball.

MobCraft has its own reason for calling this beer Oddball, as it states on the can, “Most of our beers are a far cry from normal, this beer simply tastes like beer! Making it our oddball.”

Yes, this does taste like beer – a clean, crisp and balanced beer. Huzzah!

For the first time, I came across a four-pack of organic Apricot Ale from the great Yorkshire brewery, Samuel Smith. I’ve had their cherry, raspberry and strawberry ales, and love each of them for their luscious fruitiness.

However, I was standing up when I cracked open my first bottle of Apricot Ale and took a whiff as I poured it into a glass. I was almost bowled over by the intense and lovely apricot aroma. 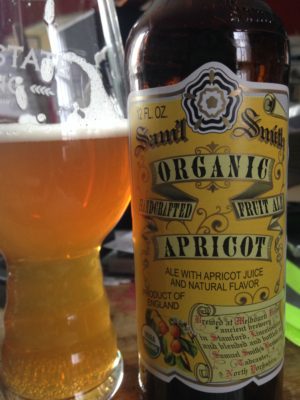 And the taste? Let me put it this way – why does it only come in four-packs? I need at least a case of this to slake my apricot thirst. Better yet, on tap from the kitchen faucet so I can start my day with a big apricot smile.

The ale is brewed from barley and wheat at All Saint’s Brewery in Stamford, Lincolnshire, and then taken north to Tadcaster and the Sam Smith brewery, where the ale is introduced to organic apricot juice to create the heavenly nectar inside these bottles.

This beer could be the answer to all the world’s ills.