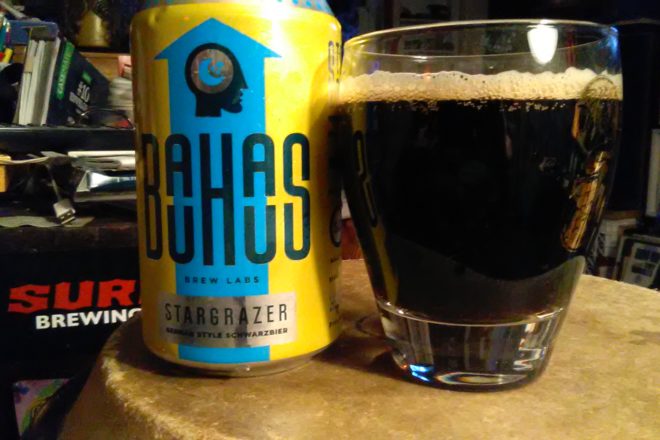 I was recently gifted a couple of cans of a really tasty dark lager, but, in truth, there are very few dark lagers I have not liked. In fact, earlier in the day, I had a delicious pint of 1554 Black Lager from New Belgium and found it absolutely delicious.

So I get home from work with a hunger for mashed cauliflower. (Steam the cauli; squeeze out as much liquid as you can; then immersion-blend it with a chunk of four-year-old cheddar and maybe a quarter-cup of coconut cream.) Add a smoked sausage with jalapeños on the side, and that’s a meal. I had a glass of syrah with it. Yum!

After washing the dishes and cleaning up the kitchen, I poured another glass of wine, and then I realized I didn’t want more wine. I wanted a beer for dessert. That’s when I remembered the dark lager. I stuck a funnel in the syrah bottle and poured the glass of wine down it, and then I pulled a can of Stargrazer German-Style Schwarzbier from Bauhaus Brew Labs of Minneapolis.

It’s a nice, soft, toasty dark lager. You get a nice mouthful of roasted malts with a bright hop finish. Very good!

But then I made the mistake of looking at the Bauhaus website. I should have known what to expect with the full name – Bauhaus Brew Labs.

Here’s what they have to say about the beer:

“If you’ve never time-traveled, then take it from us – Stargrazer will be your personal slingshot through time and space. Our Schwarzbier is a jet-black mystery, delivering a surprisingly light body and bright hop profile without the heavy roast qualities you find in most dark beers. It’s as black as the night sky, yet amazingly refreshing and smooth. How do we do it? It’s like, science. Don’t overthink it, just enjoy. Overall country winner at 2017 World Beer Awards in the Dark Lager Category.”

The line I object to? “… without the heavy roast qualities you find in most dark beers.”

What in the hell are they talking about? Sounds like they are dissing other darks, and that’s not nice. Plus, it’s not true. Sounds a bit like big-headed Minneapolitan to me.

Next I go to their About page, and my suspicions are confirmed. Not only is there a reference to German architect Walter Gropius’ art school called Bauhaus, but it includes a link to the Wikipedia page on the short-lived art school that fell victim to the Nazis (1919-33), just in case you needed some culture in your miserable existence.

But at least the beer is good.