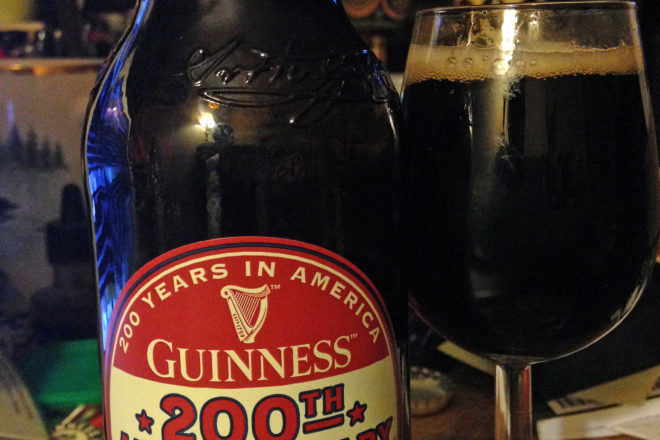 What stout lover could resist a 200th Anniversary Export Stout from Guinness, commemorating 200 years of Guinness in America?

This stout is proudly brewed with the darkest of roast malts – black patent malt, an extreme-roasted malt that Brew Your Own magazine once tongue-in-cheekedly referred to as the “malt equivalent of the crazy uncle that lives under the stairs.” That article was referencing the not-quite-burnt, somewhat acrid nature of black patent malt that turns some brewers off.

The article went on to explain the underappreciated nature of black patent malt: “When used properly, in the right beer, nothing can replace black malt for what it lends to a beer. Black malt primarily gives a highly roasted flavor, that carries some bitterness and acidity. But it can also show a deep fruity character reminiscent of currants, blackberries or sultanas. It gives deep contrast to a round malty beer by giving it some elbows, without being pushy. Most importantly, even in very small quantities, it provides a drying quality that brightens up the finish of any beer.”

Black patent malt was always a key ingredient of any stouts I homebrewed back in the day when it was necessary to brew your own beer.

The label on this beer says in honor of the 200th anniversary, they used an 1817 recipe that includes black patent malt. Well, that in itself is a revelation to me. When did Guinness stop using black patent malt to brew stout? Is that why draft Guinness tastes so bland?

To me, this is the very epitome of stout – dark, dark, dark.

My first taste of Guinness was on tap in an English pub in Lincolnshire when I was 18. I will never forget that first glass of Guinness – it tasted unlike anything I had ever had. I described it then and to this day as tasting like Earth’s blood. I fell in love with Guinness that day. But then the recipe seemed to have been dumbed down, unless you bought the Export Stout version, which retained the dark complexity of the Guinness I first fell in love with.

Thank you Guinness for this historic stout!