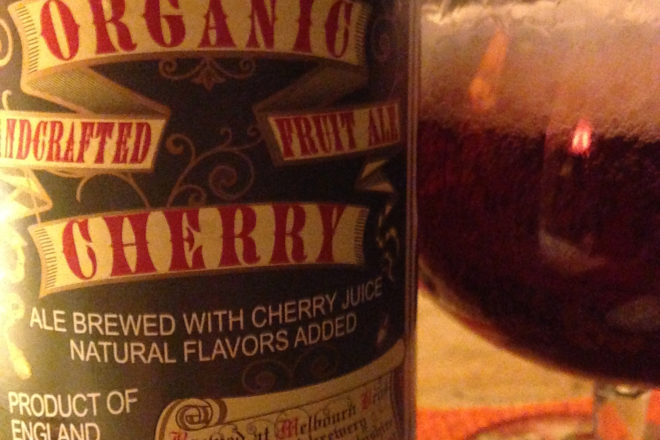 April 3 – Election Day – might have been the worst day of winter, and it’s spring! It blew hard here in Door County, and we might have gotten more snow than any other storm this lengthy winter of 2017-18. It seemed that way when I trundled out the next morning to move the deeply encrusted Hyundai so the lot could be plowed.

And cold? That night seemed to be the coldest night of the year. Bitter cold. Plus I’d wasted too much of the day on an issue bully. That’s always wasted time, time I can’t spare. I needed a pick-me-up.

Magic fridge knew just what I needed when it gave up a Sam’l Smith Organic Cherry Ale. Did I spell that right? Orgasmic?

This beer begins life as an organic wheat and barley ale brewed at All Saints Brewery in Stamford, Lincolnshire, an area where I once lived, although I don’t recall Stamford. Swineshead, yes. Bicker, of course. Boston, uh huh.

That ale, brewed with old steam-powered equipment in the stone building that houses the All Saints Pub and Brewery, is then brought north to Tadcaster, Yorkshire, home of Samuel Smith’s brewery. The All Saints ale is then blended with a Sam’l Smith cellared organic ale and organic cherry juice to create this sublime fruit ale.

Big cherry aroma! Big cherry flavor! She got the way to move me, Cherry!

Too bad it only comes in Brit bomber size – 18.2 ounces. I’d prefer at least a municipal reservoir size for personal use. Yes, this on tap would solve many of the world’s problems.

I go to the local with a couple of thoughts in mind, and then I see the New Glarus fruit beer lineup, previously only available in 25-ounce bombers, in 12-ounce four packs for the same price as the bomber. A lightning-swift calculation reveals that the four-pack is a better deal, but instead of going for the Belgian Red made with Door County cherries, I grabbed what I refer to as summer in a bottle – Raspberry Tart. 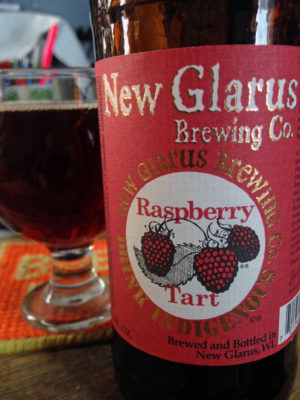 This is the beer I’ve always said is best on that coldest day of the year because of its summery aroma and big, round raspberry tartness. This is the proverbial tart with a heart of gold.

And I would like to nominate Dan Carey’s text on this 12-ouncer as the most minuscule type ever attempted for human consumption. Hard on the old lookballs.

But, never mind. Have another sip. Relax. Get to it.