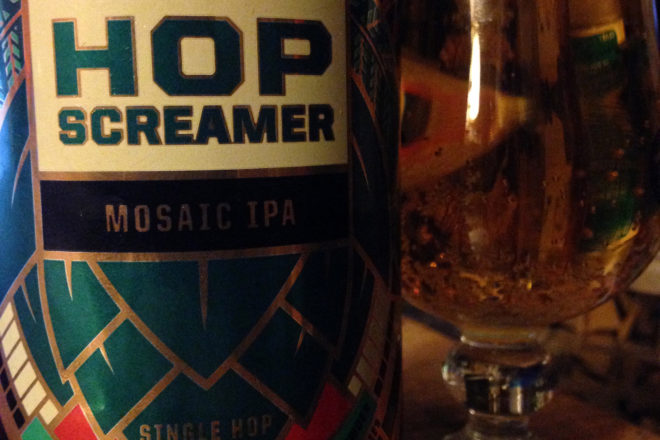 What a pretty can. A colorful mosaic, playing, of course, on the single hop series nature of this beer – Hop Screamer Mosaic IPA from Brickstone Brewery of Bourbonnais, Ill.

I did not expect to like a beer with such a flaming name.

First thing you get is a big piney gym sock aroma, and then a tasty IPA with a nice but not overpowering hop bite, and with just the hint of caramelly flavor underneath it all.

Yes, this is quite a refined little beer. I can only imagine how this beauty tastes fresh out of the tap.

Thanks to colleague Myles Dannhausen Jr. for turning me onto this IPA from the Land of Lincoln. 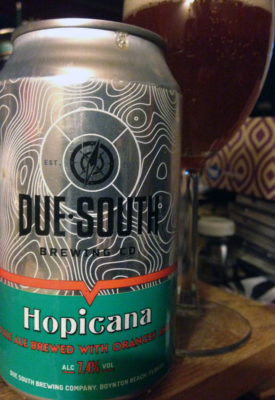 Next up, another India pale ale in another interesting can – Hopicana from Due-South Brewing of Boynton Beach, Fla., dropped off at the office for me by a reader who did not identify him or herself.

Well, thanks anonymous bringer of beer from Boynton Beach.

Even better, this is a RyePA, brewed with rye and locally sourced orange blossom honey and Valencia oranges.

I think I smell oranges as soon as I pop the top. When I pour it into a vessel, the beer has a lovely honey-orange glow, with a beautiful, creamy white foam on top that clings tenaciously to the sides each time I tip the glass to drink. I love that look.

The honey, I think, also gives the liquid in the glass a certain viscous appearance, as though it is on the verge of coagulating. Or perhaps it’s suspended solids. Kind of like a beery snowglobe in my glass.

The releases will include Vertigogo, a milk stout brewed with coffee and cinnamon; Dnt Lstn, a saison fermented in a chardonnay barrel; and at 2 pm, pouring from a firkin of Vertigogo with chocolate and raspberries.

Here is this year’s lineup of brewers (the pouring begins at 2 pm):

March 24: A noon pour with Central Waters (Amherst). This also precedes the Roar Off the Shore Beer Fest at the Kewaunee County Fairgrounds in Luxemburg.