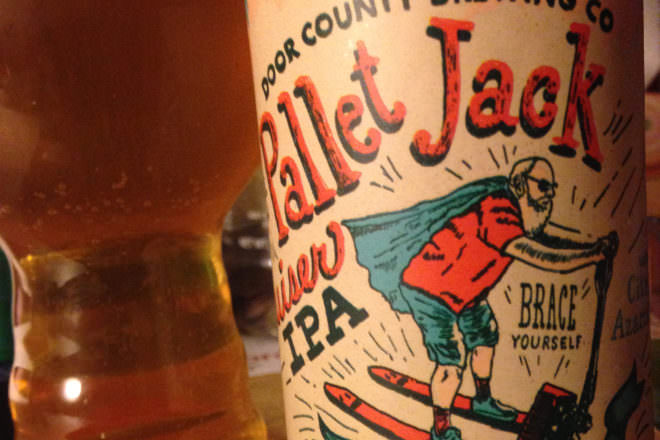 I distinctly recall Danny McMahon telling me a few years back that he was not going to bow to the ridiculous clamor for American IPAs. And now here I sit with Door County Brewing’s latest release, an American IPA called Pallet Jack Cruiser IPA.

It appears the American IPA weirdoes aren’t going away as soon as some of us had hoped, so you can’t blame a brewer for giving the unwashed masses what they want. It’s good business.

But I will never be a fan of this style. Give me a British IPA or pale ale any day before an American IPA, aka West Coast IPA since it started out there with Sierra Nevada and other early craft brewers who wanted to highlight hops in pale ales. I prefer the more balanced approach of the inventors of the style, the Brits. British pales seem so much more mature than the strident, pimply-faced, squeaky-voiced American IPAs.

Love the label, featuring brewmaster Danny’s dad, brewery patriarch John McMahon, in cape and shorts riding a pallet jack, and looking like an escapee from a Harvey Pekar comic.

“Safety First!” the neck label warns in jovial type. The words “Brace Yourself” reverberate in the space between John and the pallet jack handle.

Rumor has it that Danny actually rode a pallet jack down the hill outside the brewery in Baileys Harbor, but John magically appeared on the label.

I mentioned to him that he’s a star now. “It’s about time,” he said.

This is a 4.5 percent session beer – or, as the ribbon beneath the McMahon pallet jack ride states, “Crushable.”

Two hop varieties are used – Azacca and Citra. I had to look up Azacca. It’s named for the Haitian god of agriculture and its claim to fame is being “big in citrus and tropical fruit tones,” according to the American Dwarf Hop Association, creator of this hybrid. The familiar Northern Brewer and Summit hops are its grandparents. I had no idea American dwarves were into hops. Just goes to show, you learn something new every day drinking beer.

Despite what I said above about disliking this style, Pallet Jack grew on me. As it warmed, the hop sharpness receded. And, still, I think the IPA weirdoes will love it, too, but they might want to keep it real cold.

If you can’t make it for that, note the return of invited brewers bringing specialty pins of beer to serve at Ahnapee beginning Feb. 4 with Titletown Brewing. Here’s the lineup through March:

Also on March 25, the 11th annual Kewaunee and Dyckesville Lions Club Roar on the Shore Brewfest in Luxemburg. We’ll have more details as the date nears.