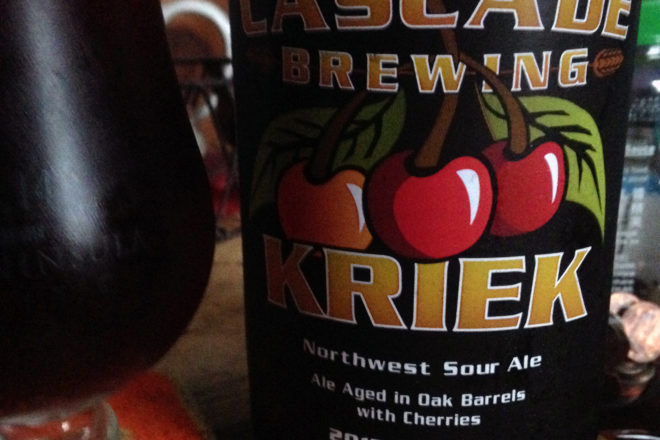 Weird day today. Rained off and on, mostly on, so a steady stream of mushy tires driving past my window. I don’t know why that sound weighs on me so much. Smush. Smush. Smush.

There’s a sense of Sunday afternoon sadness in the air, and I need something to dispel it.

I pull out Ann Peebles’ album I Can’t Stand the Rain, for that great title tune. I always refer to Ann as the female Al Green. Same band and same producer, Willie Mitchell, at Hi Records in Memphis.

“I can’t stand the rain

But the dark cloud continues to hover, so, yes, I do believe it is time to reach into the top shelf of the magic fridge and pull out a bomber bottle that I have been saving for just such a rainy day – Cascade Brewing’s Kriek, with three cheery, bright cherries beckoning from the label.

This is an ale aged for up to 17 months in oak wine barrels with Bing and Montmorency cherries, brewed back in 2015.

Oh my, that is good! This is one elegant tart. A big, round mouthful of liquid sunshine.

Cascade of Portland, Ore., has been at the forefront of sour ale brewing in its American craft iteration. This Kriek has been an annual brewery staple since 2007, and, according to the website, is the flagship beer of their sour ale projects.

And with good reason, I say. The cherry flavor is dominant, which has to make you happy because cherries just have a happy flavor. Halfway into this bottle, you’ll be jumping up and down with joy, singing Ren & Stimpy’s “Happy, Happy, Joy, Joy” song. Or, at least, I was when I got halfway in – damn the rain and the mushy tires.

With a little Kriek in you, the world’s a damn fine place again. Full speed ahead!