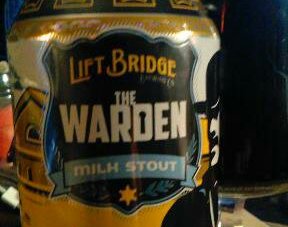 It’s the day after winter officially arrived, and there has been a definite bone-chilling coldness in the air. I reach into the magic fridge with the notion that I better find something appropriate right off the bat or I’m turning to brown liquor.

To my great delight, I pulled out a a can of The Warden, a milk stout from Lift Bridge Brewing of Stillwater, Minn.

I pour it into a tall glass, take the first sip and realize the refrigerator has rendered this beer almost tasteless. It must be warmed up, which I set about doing by wrapping my hands around the cold glass and swirling the liquid. Eventually, the darkness prevails.

So, one of the first things I was going to mention is that if, like me, you don’t feel the need to heat your living quarters beyond the passive-solar heating of a large, southern-exposure picture window, this beer should be kept at room temperature.

But then I notice the can states: “Protect and serve COLD.”

That reminds me of a recent business meeting I had with a couple other folks over a beer. We went to a place that has a pretty good craft tap lineup, but they only serve beer in the ugly, ubiquitous American shaker pint, which is my very least favorite beer delivery system. And, worse, they serve frosted pints. My associates and I were not aware of these things when we ordered Dragon Milk Stout that was served in frosted American pint glasses, which is so wrong in so many ways. One of the people even ordered a small beer and, without explanation, was served a pint.

I did let the Lift Bridge warm to room temperature, and suddenly a cavalcade of dark flavors showed its presence.

Honestly, this is the first time I’ve seen a brewery tell customers it should drink their stout cold. If they were talking lager, OK, but stout should never, ever be served cold because the cold masks flavors, and stout is nothing if not a parade of flavors.As The Warden warmed, the flavors of dark chocolate, espresso and midnight kicked in and made me shake my head at the brewery’s admonition to serve cold milk stout. I wonder how many people have followed the brewery’s advice and then decided they wouldn’t try that “tasteless” brewery again.