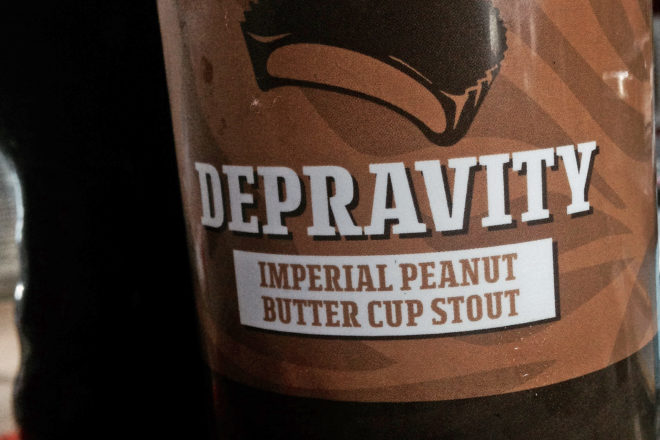 I couldn’t wait to take a big bite out of a beer called Depravity, not because of the name but because it is identified as an imperial peanut butter cup stout.

Yup, you read that right. Each keg of this beer from the Renegade Brewing Co of Denver, Colo., contains a pound of Reese’s Peanut Butter Cups and a pound of dehydrated peanut butter.

How can you not love this idea?

This is a fabulous, lip-sticking stout. Lots of dark fruit in the flavor. I’m reminded of a mash-up of liquid raisin pie and molasses cookies.

And after that initial powerful flavor wave subsides, the peanut butter and chocolate raise their hands, followed by a stiff shot of bitter espresso. So thick and rich and delicious! Keep your lips lubricated or they could stick together forever.

Definitely a sipping stout. I just want to linger with each sip, letting the layers of big flavors wash over me.

This is a big, bold 11 percent stout, big enough that it almost feels you could take a bite out of it. It almost starts an involuntary chewing. I believe an earlier incarnation of this beer was known as Black Gold. A fitting name. If it came from Texas, Texas Tea would also work.

But I’m not so sure about the name Depravity, which means evil moral corruption. For example, Charles Manson might be considered a depraved individual. Or certain political figures. Christians would say depravity represents our innate corruption due to original sin. Both sound out of place for this heavenly beer.

Decadence, sure, but that word was probably already taken in the brewing world.

The label refers to this beer as “offensively delicious,” so maybe Depravity fits in the brewery’s Renegade schtick.

My other thought – as someone who works with words every day –is that whoever OKed the name thought the word meant something else.

Whatever the case, this is definitely an instance where the name just does not fit the beer because nothing this tasty could be evil.