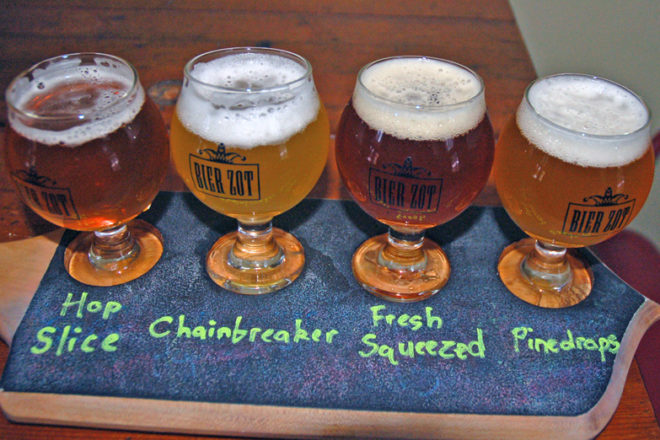 When I learned that my favorite beer bar – Bier Zot in Sister Bay – was having a tap takeover by Deschutes Brewery of Bend, Oregon, I had my mind set on darkness – things like Obsidian Stout, Abyss Imperial Stout and Black Butte Porter.

Imagine my surprise, then, when I see four IPAs on tap. I had never thought of Deschutes as an IPA brewery, but I guess that’s what you have to do these days – appeal to the unwashed masses who are clamoring for hopped-up India pale ales. I recently ran across a website devoted to IPAs, which boldly declared them to be the “flagship” beer of craft brewing. To that I say BS. IPAs are just a silly phase that the still relatively young craft beer industry will outgrow. In fact, I would like to see a renaming of most of them to APAs, or American Pale Ales, because most of the beers brewed under the name IPA are nothing at all like the beautifully balanced English IPAs that I grew up with and pine for every time I am presented with yet another outrageously hopped American “IPA.”

Still, I ordered a flight of the four Deschutes India pale ales, thinking to myself, I can take it.

I started off with Hop Slice Session IPA, where I got lost in a wonderful complexity of flavors that ended in a lemony twist right in the center of the palate. Pat Bohn, Wisconsin rep for Deschutes, said Hop Slice marks the first time in its 28 years in business that Deschutes brewed with fruit, in this case, Meyer lemons. Meyers are a cross between lemons and tangerines, so have less acidity and a bit more sweetness than a regular lemon. They really give this beer a grand finish.

Next up was Chainbreaker White IPA, which is the brewery’s version of a hopped-up wit. Brewed with wheat and pilsner malt, four kinds of hop cones – Bravo, Centennial, Cascade, Amarillo – give this wit the credentials to be called an IPA, while orange and coriander make it witty. If orange-spiced beer frightens you, don’t worry because the orange and spice are subtle here.

I moved on to Fresh Squeezed IPA, which was by far the darkest of the four IPAs. The brewery says about this beer that it’s “as if fresh Citra and Mosaic hops were squeezed straight into the bottle.” Big citrusy/grapefruit aroma and taste. If you like that sort of thing, this beer is for you.

The flight finished with a punch in the face from Pinedrops IPA. And I’m not kidding about the punch in the face. I actually had to shake off the first sip. Being a glutton for punishment, I took the piney punches until the bitter end. And enjoyed each punch/sip.

Just as I finished the IPAs, Mr. Bohn brought me a glass of Not the Stoic, a Belgian-style quad brewed with pomegranate molasses and aged in pinot noir and rye oak casks. This beer won the best strong dark beer award at the World Beer Awards in both 2014 and ’15. I know why. It’s a fantastic beer!

The world would be a far better place if people had this beer to drink daily instead of way, way, way too many IPAs.