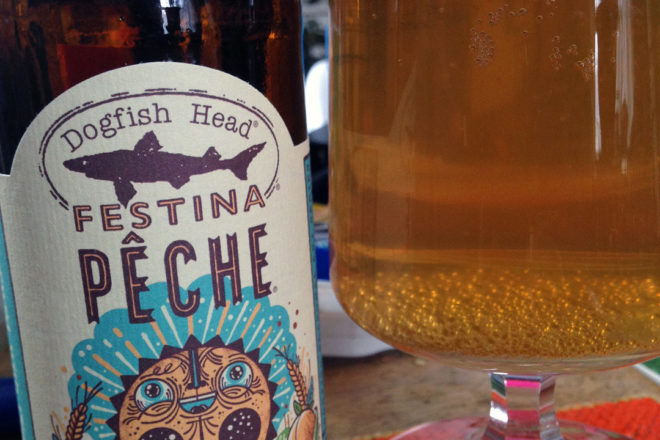 After a grueling day at work, I stopped at the local beer merchant with the idea of a rich, dark beer to put things right with the world.

Instead, I walked out with a four-park of Festina Peche and the idea to spin the Allman Brothers’ 1972 double record Eat A Peach when I got home.

Besides the fact that Festina Peche was on sale, I heard this “neo-Berliner Weisse” from Dogfish Head Craft Brewery of Milton, Del., calling my name from the shelf.

The reason it was on sale, this summer seasonal was from 2016.

Even better, I thought. Let’s see if the well-regarded Dogfish Head makes beer that lasts.

I pulled out Eat A Peach, featuring the last recordings of 24-year-old guitarist and spiritual leader Duane Allman, who died from injuries in a motorcycle crash just three months before the album’s release. Besides great songs such as “Melissa” (reputedly Duane’s favorite), “Ain’t Wastin’ Time No More” and “Blue Sky,” there are two sides of the life-affirming “Mountain Jam,” a jammy riff on Donovan’s “There Is a Mountain.”

I cue up side one of “Mountain Jam,” crack open a bottle of Festina Peche, and am greeted aurally by the joyful and soaring twin lead guitars of Duane Allman and Dicky Betts paying tribute to the great Donovan, and aromatically by a whiff of peachy yeastiness.

Berliner Weisse is one of the original sour beers – a wheat beer inoculated with Lactobacillus, hence the dry sourness. Berliner Weisse are usually about the lowest alcohol beer you can find, 3 to 4 percent. Festina Peche rises slightly above to 4.5 percent.

Traditionally, Berliner Weisse’s tartness is toned down by serving it with a syrup, either a green herbal woodruff or red raspberry syrup.

I like the puckering tartness without the syrup, but here with the Festina Peche, the brewery has added the fruit for you in the form of peach juice.

It has a very peachy color, but I struggled to find the peachiness in the flavor. There is a general fruitiness, but I can’t pin it to a single fruit. Might be a little green apple in there. Green grape. Is that mango?

The brewery explains why you don’t get an outright peach flavor:

“In Festina Peche, since the natural peach sugars are eaten by the yeast, the fruit complexity is woven into both the aroma and the taste of the beer so there is no need to doctor it with woodruff or raspberry syrup. Just open and enjoy!”

What you do get is a nice underlying tartness that pairs very well with Duane and the Bros. performing “sweet Melissa.”

Dogfish Head only brews this for what they call “the sweaty months.” While we do not have sweaty months here in Door County, we do have a sweaty week or up to 10 days during a particularly miserable summer, so I look forward to having the 2017 version during our sweaty time.