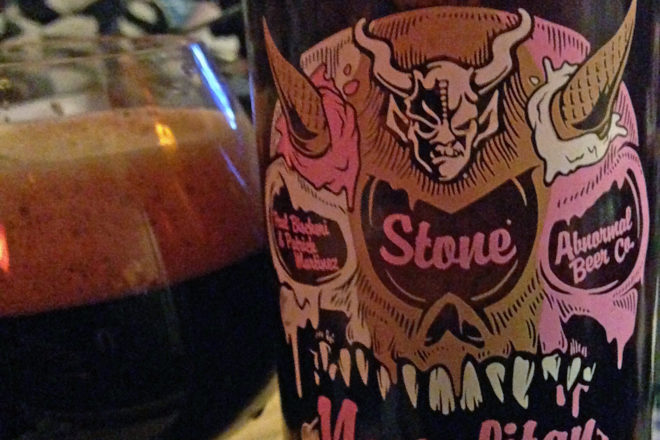 As soon as I took a whiff of this beer I was immediately transported back to my 10-year-old self hovering over a bowl of Neapolitan ice cream. Yes, I was certain Neapolitan Dynamite smelled like a bowl of vanilla-chocolate-strawberry ice cream, so much so that I wish I had a pint of the stuff.

Instead I have this imperial stout brewed with chocolate, strawberries, vanilla and coffee, a collaboration between Stone Brewing and San Diego homebrewers. This beer was the 2017 winner of an annual American Homebrewer Association-sanctioned homebrew competition held at a Stone facility (they are a tentacular brewer, listing both Escondido, Calif., and Richmond, Va. on the label).

The winning homebrewers are Paul Bischeri and Patrick Martinez. Stone enlisted Derek Gallanosa from Abnormal Beer Co., who they call a “noted Stout Master,” to help bring this beer to life.

The coffee seems an odd afterthought to the original concept, because it becomes the dominant flavor, which is not a bad thing. Who doesn’t love coffee? Then I get a bit of dark fruit pruniness. OK, there’s some chocolate – milk chocolate. And high on top of everything, yes, that’s it – strawberry.

They’ve done it! They have achieved Neapolitan beer! But now I need a bowl of the ice cream. 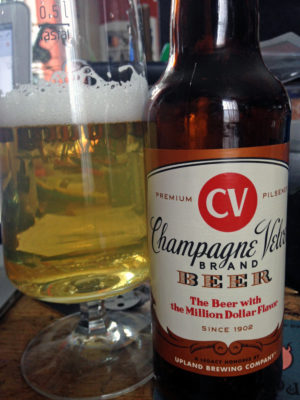 I don’t know how many times I stopped and looked at this beer, each time thinking, I’ll have to try that sometime.

But the last time I stopped and pulled out a bottle to get a better look at Champagne Velvet Brand Beer, which comes with the tagline, “The Beer with the Million Dollar Flavor” and then “Since 1902.” I also noticed the label has a best enjoyed by tag that reads January 2018. As I slipped the bottle back into the six-pack in the cooler, I also noticed it is the last sixer of this beer, so, the time has arrived to learn more about Champagne Velvet.

How can you not love that name?

It is described on the label as “A Legacy Honored by Upland Brewing Company” of Bloomington, Ind.

This pre-Prohibition lager pours a pale, slightly hazy golden color with a nice white head that collects on the sides of the glass as you drink your way down. The haze, I am guessing, comes from the flaked corn traditionally used on pre-Pro lagers.

Champagne Velvet has a wonderfully checkered past. Shortly after it was developed in 1902 at the 1855-founded Terre Haute Brewing Co., it became the brewery’s flagship beer until the evil experiment known as Prohibition was imposed and the brewery closed its door.

A group of investors re-opened the brewery and relaunched Champagne Velvet in 1934. By the end of the year CV was being sold in 19 states and had become an Indiana favorite.

But the age of the regional brewery was coming to a close when Terre Haute Brewing shut down in 1958. However, Champagne Velvet was popular enough that it bounced around to other brewers, until eventually joining the House of Heileman in La Crosse. Heileman turned Champagne Velvet into a cheap malt liquor, which immediately brought a challenge from makers of another malt liquor with a similar name, Champale.

In 1975 Pickett Brewing of Dubuque, Iowa, bought the label, began producing the malt liquor and was immediately sued by Champale. Pickett won the lawsuit, but could not avoid the stigma of the cheap brew CV had become.

A Terre Haute resident attempted to revive the brewery and in 2000 began producing Champagne Velvet again with the original 1902 recipe, but that business died in 2006.

Upland Brewing, founded in Bloomington, Ind., in 1998, was looking for a special beer to mark its 15th anniversary and decided to celebrate Indiana brewing heritage by reinvigorating the Champagne Velvet brand. The brewery found a local malt house that created a pre-Prohibition malt style that they use in this pilsner with “The Million Dollar Taste.”