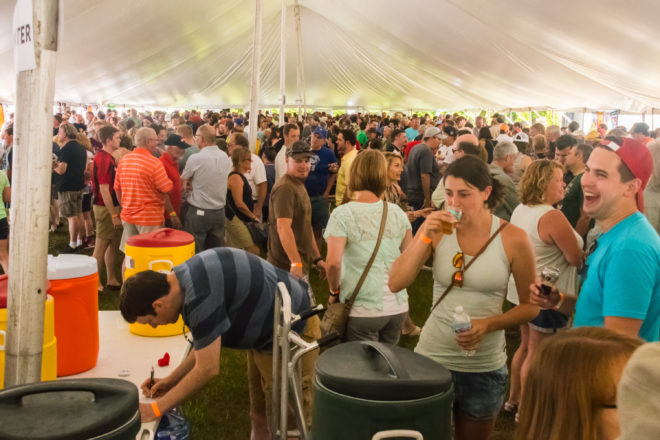 It was a beery weekend here. I kicked things off with the 2nd annual pre-Door County Beer Fest beer dinner at Whistling Swan in Fish Creek on Friday.

Wow! What an amazing meal prepared by Chef Ryan Klawitter and his staff, and what beautiful beer pairings.

The event kicked off with a beer from host brewery Hinterland – a wheat beer brewed with honey, rhubarb and fennel. The honey came across in the first wave of flavor on top of the palate, and then the rhubarb tartness kicked in with a big round push. Try as I might, I could not find a fennel presence. However, one of my fellow tasters who does not like fennel said its presence made her nose prickle.

Next to anticipating the delicious food and beer pairings, I look forward to hearing from the brewers. Each of the four courses was paired with a beer from a different brewery, and the brewers were there to talk about their brewery and beer.

First up was Brad Stillmank of Stillmank Brewing in Green Bay. In what seemed like a match made in heaven, Stillmank’s Super Kind Green Bay IPA was paired with a delicious whitefish ceviche.

“Please enjoy the aroma of the beer,” Stillmank advised diners. “It really is Wisconsin grown.”

Next up was Hinterland’s Pub Draught served with an absolutely irresistible grilled asparagus with prosciutto, rye crumb and Swiss cheese foam. What a tremendous combination of bites they were! Hinterland owner Bill Tressler explained that Pub Draught is a nitrogenized English pale ale that his brewery has decided to stop producing. Because of the current predominance of IPAs in the marketplace, Tressler said it is hard to sell a mere pale ale. (Personally, I will take a great English pale ale such as Worthington’s before an American IPA any day.)

Sam Yanda, co-founder and head brewer at Badger State Brewing in Green Bay, introduced his Bunyan Brown Ale as a southern English-style brown ale. The very first time I tasted this beer and wrote about it, I tasted rye spiciness that I have never tasted in an English brown, north or south. Yanda confirmed in his description of the beer that, indeed, rye is used in the brewing process.

Despite my reservations about calling this an English brown, it is a delicious beer, and the pairing of this American brown ale with a succulent Korean BBQ braised beef shortrib, coconut rice and Napa cabbage slaw was sublime. I almost shed a tear when that course came to an end.

Head brewer Danny McMahon explained that Silurian Stout is brewed with local grains and hops. The only thing not local in the ingredients is the crushed vanilla beans, which were on magnificent display paired with dessert.

I’ve been to a few beer dinners in the last couple of decades, and I have to say this was by far the best one I’ve attended in terms of the care and forethought put into the meal and the perfection of the pairings. I would suggest you not miss this beer dinner next year.

Saturday morning I was up at an ungodly hour to make the 9:30 am VIP brunch before the start of the 5th Annual Door County Beer Fest.

Held in the Baileys Harbor Town Hall Auditorium, about 60 people showed up for the brunch and presentation by Kyle Cherek, host of Wisconsin Public Television’s Emmy-nominated Wisconsin Foodie.

After an interesting history of brunch, Cherek invited Door County Brewing’s brewmaster Danny McMahon and Island Orchard Cider owner Bob Purman up front with him to tell their stories and talk about their businesses, while the rest of us chowed down on hardy breakfast burritos from Joel Bremer and his staff at Good Eggs in Ephraim, paired with a variety of beverages.

We started off with a taste of Tangerine IPA from the Potosi Brewing Co. (I’ll be saying more about that beer in an upcoming Cheers! column), followed by Island Orchard’s Herbacious Beast, a hopped apple cider. I love this champagne cider!

For those like me who enjoy a cup of coffee with brunch, Stillmank Brewing’s Perky Porter was next. It did the trick for the coffee jolt (I’ll have more to say on this one in the future as well). We went from a coffee-flavored porter to the new love of my life – Ca-Cao from 5 Rabbit Cerveceria of Chicago. It’s made with Peruvian chocolate, two kind of chiles, toasted pumpkin seeds, vanilla beans and cinnamon.

There were a couple of other exciting beers available for tasting at the VIP brunch, but I could not leave my new 10.7 percent sweetie! Yum!

Finally, about 11:30 I rolled over to the beer fest. Three beers really stood out to me from the 220 beers available. I’m a sucker for coconut, so really enjoyed the Coconut Brown from Blackrocks Brewery of Marquette, Mich. But I could not stop returning to the Epic Brewing table for more samples of Elder Brett, a lovely sour saison, and the Big Bad Baptist, a high octane imperial stout with cocoa nibs and dark roasted coffee. Who would have thought such amazing beers would come out of Salt Lake City?