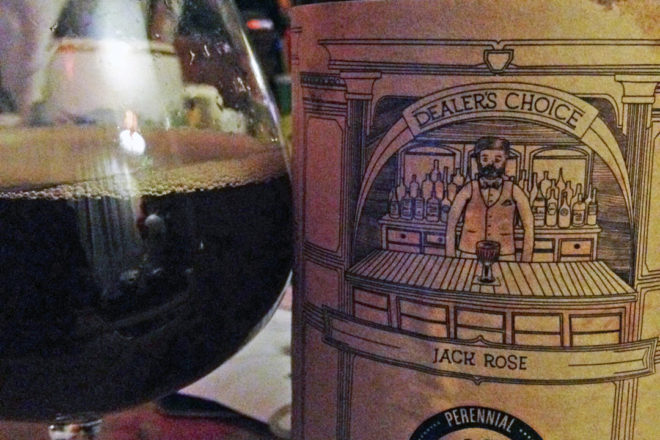 OK. Here’s an odd beer on the shelf that I had to try – a bomber bottle with a typically ambiguous modern label featuring a New Yorker-type cartoon bartender, standing, I think, at a bar and under a banner that reads Dealers Circle.

Hmmm! That means nothing to me.

Beneath that scene are the words JACK ROSE in type not much larger than what you see here. OK, ditto above.

Beneath that is the brewery logo – a lovely but, to me, unidentifiable green, fan-like object in a black ring, with the name Perennial Artisan Ales of St. Louis, Mo.

Next I read that this is an eight percent ale brewed with apple juice and with natural flavors added. Doesn’t that sound like fun? It does to me, but I’m not quite understanding yet.

I note the lovely green logo thing standing out on the black bottle cap, so pry it off gently in order to keep it intact for a spot on the magic fridge. But all of a sudden I have a squirter!

A Niagara of pinkish foam poured from the bottle. Well, poured isn’t the right word. The foam went straight up several inches, shaped like the bottleneck it had just come from, before collapsing and turning to liquid on my floor.

I quickly poured some into a snifter, and the snifter quickly filled and then overflowed with the pink foam.

Not sure what the name of this beer is. Might be Dealer’s Choice. Might be Jack Rose. Might be a combination of the two. It is the typically ambiguous modern label that confuses me about the name.

Guess that means I have to put on the special spectacle microscopes to read the crabbed type on the label.

It tells me that Dealer’s Choice is a series that celebrates “mixed drinks and our talented friends behinds bars across the country.”

Next paragraph:  “Jack Rose is a hybrid of beer and cider fermented with a healthy dose of Illinois apple juice and finished with pomegranate and key lime juice.”

Hmmm! Wouldn’t have guessed that.

And, finally, “It’s a big burst of fruit accented with a twist of citrus and a bit of spicy rye.”

Here I am going to show my lack of knowledge of long-form Hemingway. Apparently, a Jack Rose cocktail is mentioned in The Sun Also Rises. A Jack Rose is applejack brandy, grenadine, and lemon or lime juice.

OK. I get it. There’s something appley going on here. For sure a spicy finish.

The fizz I mentioned earlier has evened out now, but not on the palate. Inside that fizziness, the pomegranate and key lime tang pops out. Nice!

Cocktail? Sure. I get it.