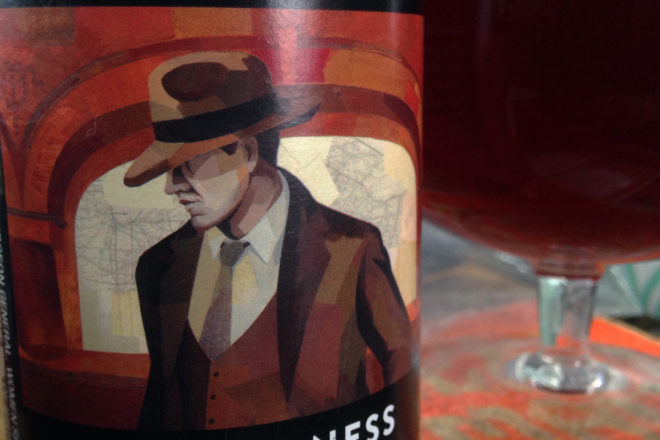 There was a time in another century when I would go out of my way for an amber beer. I was in love with the caramelly maltiness of the style.

And then I wasn’t. I completely lost my taste for red beer. Tasted cloying, like someone trying to hang on in an affair that has obviously ended. Haven’t had one in years. Until now.

Walking into the local beer emporium and feeling like a lager, my eyes fell on the black, white and brown labelscape of Eliot Ness Amber Lager from Great Lakes Brewing Co. of Cleveland, Ohio. OK. I dig their Edmund Fitzgerald Porter. It’s probably been more than two decades since I’ve had a red beer, so, let’s give it a go.

Well, it’s red and it smells like beer. Nice balance of malt-forwardness and sharp hop finish. Definitely on the sweetish side of lager, which, of course, is the hallmark of amber beer.

And then there’s the name. After Prohibition, the Treasury Dept. assigned Eliot Ness to its Ohio office, based in Cleveland, and he eventually left that position to become Cleveland’s youngest safety director at the age of 33. This was all after he and his Untouchables brought down Al Capone. Cleveland at that time was the fifth largest city in America and was considered its most dangerous.

So it’s fun to contemplate those connections as I sip this amber lager, thinking of Eliot Ness, misportrayed as a teetotaler, and his fruitless pursuit of the Cleveland torso killer.

I must mention a recent email from a fellow who asked why I spend so much time “promoting” faraway businesses (i.e., breweries) when we have so many great breweries in Minnesota and Wisconsin.

I gave a curt response, but should have added a few more thoughts.

First, I drink beer. I do not promote businesses. Whether anyone wants to buy a beer from a brewery because I have written about it, well, that’s on them, not me. I’m just providing information from my perspective, and if that perspective were limited to just beers from Minnesota and Wisconsin, well, I would find that boring, and, ultimately, so would you.

It’s a big world of beer out there. I’ll try to get to everything, eventually.

I do this every week, and have done so for many years now. If I tallied up all the Minnesota and Wisconsin beers I’ve written about vs. beers from the rest of the world, I think they would come out in the end with a pretty fair balance of ink.

But, ultimately, having to justify my beery pursuit rankles me. Reminds me of the dark days in the aftermath of 9/11 when certain elements in this country were raising a stink when France refused to raise its voice in shrill unison with U.S. war hawks who wanted to invade Iraq, and suddenly, the French were cowards and French fries were Freedom fries.

At that point I did a beer column on a great French beer, and some wayward xenophobe who read the column informed me that the only reason he would by a French beer would be to shove it up my Francophile a–. I told him to come down to the newspaper office and say that, and bring the bottle of beer. He never showed up. But a semi-truck did pull up in front of my house a few weeks later to deliver a case of French ale and a very nice note from the brewer I had written about, thanking me for speaking up for them in that troubled time.