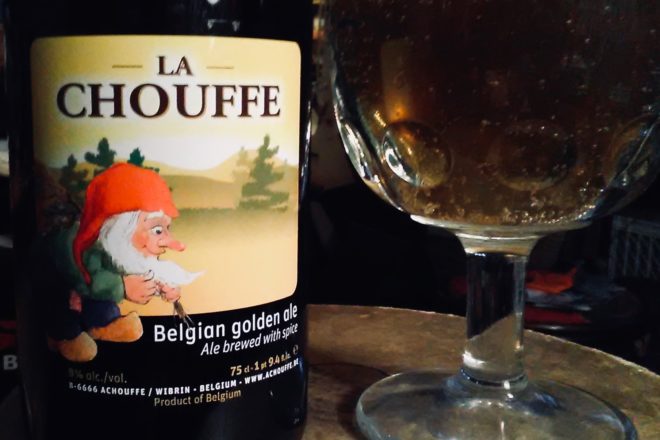 La Chouffe is my new favorite winter beer because it is so very malty, and the warming feeling of malty beer is just what a cold soul needs in the dead of a dead winter.

A pal invited me over for a trio of delicious pizzas (my favorite was an alfredo shrimp pizza that was the best I’ve had since living in Biloxi, Miss., way back in another century), and we started things off with a bomber bottle of La Chouffe, an 8 percent blond ale from the Walloon brewery Brasserie d’Achouffe, nestled in the Ardennes in the southeastern part of the country.

It was a tasty, malty treat, so I had to have the delicious Belgian golden ale again on a cold and empty Monday night.

It pours a slightly hazy gold, with a thick blanket of white riding on top. The aroma is heavenly malt and earthy coriander, a spice used in the flavoring of this Belgian beauty.

The taste is rich and malty sweet, with a surprising light, citrusy finish. So good.

Two brothers-in-law started this brewery in 1982, knowing that if it took off, as it did, they wanted to brand it differently from other Belgian beers – namely, they did not want to rely on monks and religious orders because they are surrounded by beers so branded (such as the Trappist Chimay and Rochefort). They went instead for red-hatted gnomes. Possibly constipated gnomes because they always seem doubled up as if having trouble with their piping. Chouffe, I am told, means “gnome” in the Walloon language.

Gnomes to the left of me,

gnomes to my right

stuck in the middle with La Chouffe.

(Apologies to the late Gerry Rafferty.)