Whenever I’m in Ashland I make it a point to stop at the South Shore Brewery, which celebrated its 20th year in 2015. I’m a longtime fan of their Nut Brown Ale and Rhoades’ Scholar Stout. 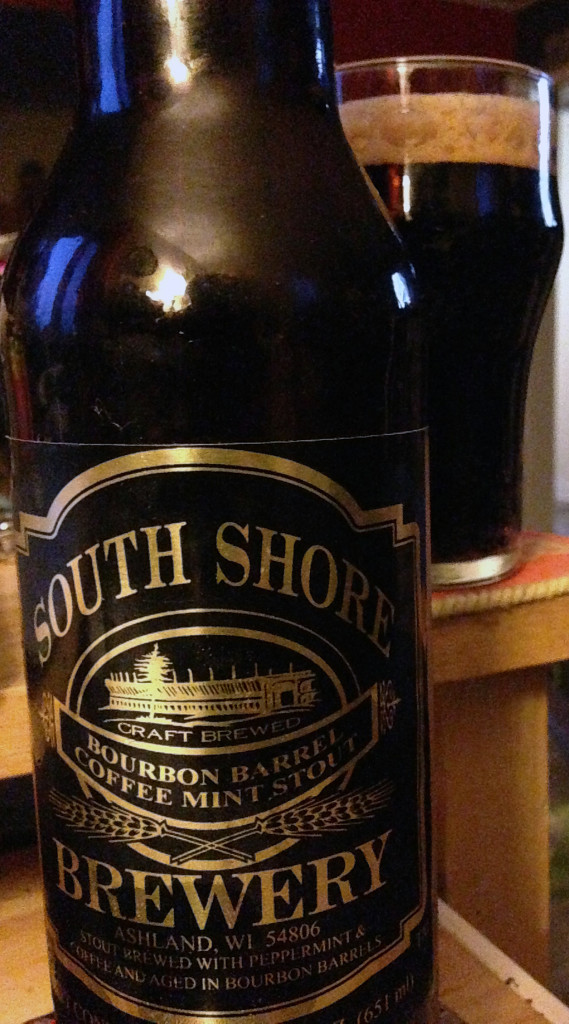 To my surprise, I reached deep into the fridge and pulled out a bomber of South Shore’s Bourbon Barrel Coffee Mint Stout that I had completely forgotten about.

The mint part of the equation scared me a bit because as far as I can recall, I’ve never had a good beer with mint. But it must have piqued my interest at some point otherwise it wouldn’t be sitting in the fridge.

Hhhhm. Interesting things going on with this beer. It has an extremely soft mouthfeel, and tastes of dark chocolate, café au lait and all the earthy, slightly astringent flavors associated with a bourbon-soaked oak barrel – all of them condensed into subtle representations of their former bold, dark selves. The peppermint I feel more than taste, in an odd prickly palate rush that runs to the front with each sip. Yes, it’s definitely more of a presence than a flavor. My mouth feels minty fresh and my lips are tingling.

Couldn’t resist the bold display of Best Damn Root Beer. I figured it had to be a boast because I’ve already had the best damn hard root beer, the unfortunately named Not Your Father’s Root Beer from Small Town Brewery of Wauconda, Ill.

I can say with certainty that it is a boast.

While the label shows a foaming barrel of Best Damn Root Beer, it poured flatter than Florida, which is the flattest state in the nation (in more ways than one, I think).

I got a strange barnyard whiff when I poured it out. I let it sit in the glass for a bit, sniffed again, and again got the strange odor. 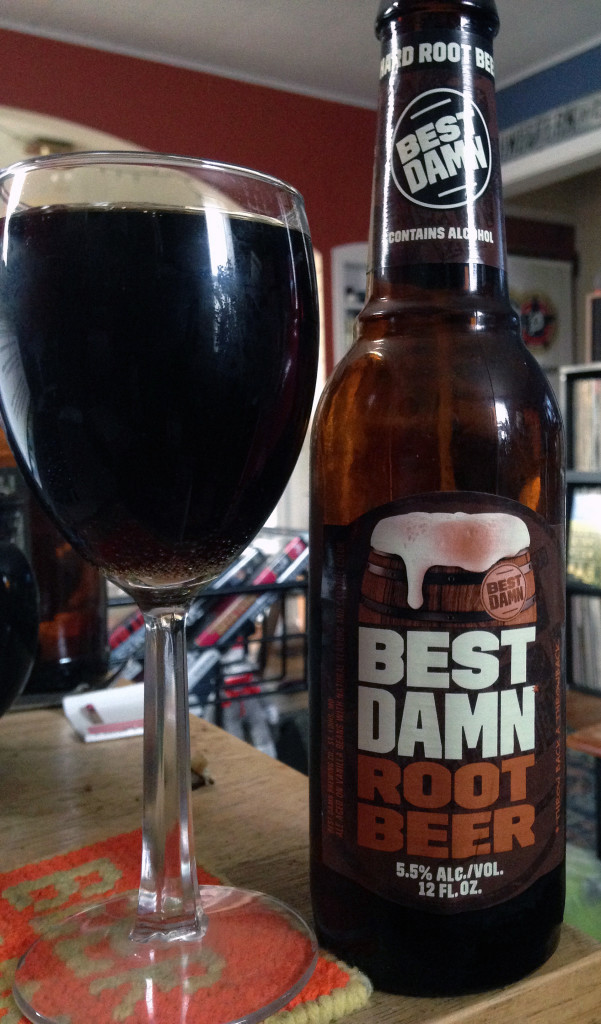 Worse, its taste falls short of the rich flavors I expect from a root beer. If anything, it tastes more like a diet root beer, which is oxymoronic, and which makes sense because I suspect this is an Anheuser-Busch product. The label doesn’t tell you, nor does the website. But according to its website, the Best Damn team appears to be based in St. Louis, Mo., home of A-B.

Always be suspicious when a “craft” beverage label tells you “Made you look” when you are perusing the small print in vain for a place of origin for the product. Another sign that it might not be from a craft brewer – below-market pricing. This Best Damn Root Beer was selling for several dollars less than the aforementioned NYFRB.

Nope, they just don’t have the flavors right to call this the Best Damn Root Beer. It’s drinkable, but my vote for best damn hard root beer remains firmly with NYFRB.