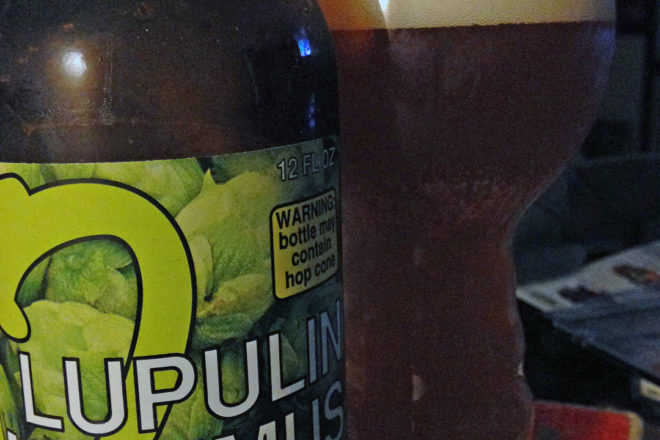 It’s the fourth night in a row of a full day of work followed by a full night of work. One of those nights included election night.

I am really, really thirsty for something good. I stick my hand into the magic fridge and pull out an amber.

Sorry, amber doesn’t have the right stuff for me right now (does it ever, I wonder). So the amber is wedged back into place and I reach farther back and pull out a Lupulin Maximus Imperial Pale Ale from O’so Brewery of Plover, Wis.

Wow, once again, magic fridge, you are the best! This is just what I needed. Lupulin Maximus is a prescription for what ails ye.

The bottle comes with a “WARNING: bottle may contain hop cone.”

Don’t know why it says “may” for I have yet to have a bottle that did not contain a mushy hop cone. It is, to my knowledge, the only beer to celebrate the hop in such a visceral way.

It pours with the most incredible rocky head. In fact, a Gibraltar like chunk of foam centered in my glass and remained to the very end, until I drank it like the last slurried slurp of a malted milk shake.

O’so has always prided itself on its “freestyle” brewing philosophy. That is obvious here with a big, beautiful, unabashed IPA.

For a high-hopped American ale, this also has a big malt base that rounds things out.

Try it. I think you’ll like it. Just don’t choke on the hop cone.