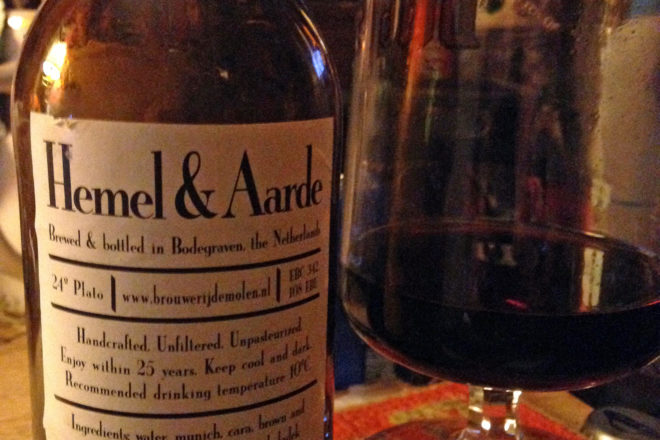 Recently I picked up two different beers from the Dutch brewer De Molen.

One was produced in 2012 and is called Hemel & Aarde (Heaven & Earth), a 10 percent Imperial stout that suggests on the label that it be enjoyed within 25 years of its birth date. That would be 2037. I’ve never seen a beer make such a claim of longevity.

The other is from 2014 and is called Heaven & Hell. It weighs in at 10.2 percent and it is suggested that it be enjoyed within a more reasonable five years.

Well, that makes my bottle of Hemel & Aarde five years, five months and seven days old. I am not waiting another 20 years. Time to crack it open, I think. I’ll save Heaven & Hell for another time.

The aroma is rich and intoxicating. I smell malt and peat and smoke.

Oh, this is incredible beer! So many amazing and complex flavors – cacao, coffee, dark fruits. The flavors cascade endlessly over the palate.

And ranging above it all – smoky peat. Turns out the brewery uses the most heavily peated malt in the world from the Bruichladdich Distillery on the Isle of Islay, Scotland, where one of the single malt scotches they produce, Octomore, is considered to be the most heavily peated single malt whisky in the world (I’ll keep my eye out for that stuff).

Not much carbonation to this beer, but that’s true to style. Imperial stouts can be just this side of greasy (or is it just the peaty smokiness that makes me think of liquid bacon, perhaps maple-flavored bacon?).

There’s also a bite at the end. Tobacco, perhaps? Yes, I used to be a smoker, and I preferred unfiltered or hand-rolled cigarettes, and inevitably you would get a flake or two of tobacco in your mouth, a sharp taste you never forget, delivering a shock to the tastebuds that might equate to a punch in the nose or a kick in the goolies.

So, this beer is not for the faint of heart. And it’s a sipper. Mine lasted through a reviewing of the great 1941 movie The Devil and Daniel Webster – 107 minutes of deliciousness, with Daniel Webster (Edward Arnold) calling upon heaven and earth to keep his client, Jabez Stone, from the clutches of Mr. Scratch (the great Walter Huston). This beer was the perfect accompaniment.