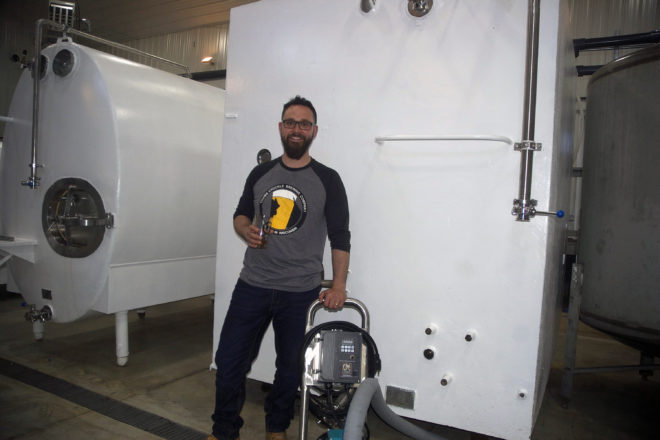 The 53rd Annual Fyr Bal Festival in Ephraim on June 17 will be unlike any of the previous events because for the first time the newly wet community will have its own beer to help celebrate the event.

The move to go wet in Ephraim was approved by voters in the spring of 2016 and the law allowing for beer and wine in the village went into effect last July 1. Now, in the first full year of wetness, the village celebrates with Fyr the Byr.

Fyr the Byr is made by the area’s newest craft brewery – Thumb Knuckle Brewing Co. of Walhain, a couple miles west of Luxemburg on Hwy. 54. It’s a Bavarian-style Helles lager that the brewery describes as “a crisp, clean, world-class, ‘beer-flavored beer.’” They call it Heyder Helles.

After traveling to the brewery before a recent meeting in Luxemburg to sample Heyder Helles, I wholeheartedly concur with the brewery’s assessment of this clean, crisp lager.

“We’re happy to partner up. It’s huge for us,” said Ed Thiry, co-owner of Thumb Knuckle, which opened its doors March 18.

Rocky Marciano, director of tourism for the Ephraim Business Council, said once it was decided to have an official beer for Fyr Bal, he consulted with Kay Distributing of De Pere.

“They recommended Thumb Knuckle Brewery,” he said. “They gave me some samples of their beer and I really liked it. They reached out to Thumb Knuckle, and they were all in favor of it. It’s nice to be able to promote them at the same time as getting something unique for a first-time experience in Ephraim.”

I have to know who came up with the great name of Fyr the Byr?

“It was a combination of myself, Ephraim Business Council President Mike McCarthy and Lana Hall over at Ephraim Shores,” Marciano said. “We were sitting around talking about having a private label for Ephraim. Lana said something like it would be end of times when Ephraim has its own beer. Fear the beer. It kind of went from there. That’s when we decided, let’s trademark it and that’s going to be the name of our beer.”

For now, Fyr the Byr will only be available on draft at the festival. Marciano said festgoers will be able to buy a souvenir Fyr the Byr cup that they can use to get refills for $4 instead of the regular $5 cost of beer.

“At the moment, the beer is going to be a Fyr Bal specialty, just here for that,” Marciano said. “At some point, I’m looking into the Monday night concert series and things like that. Nothing has been cleared by the village board as far as allowing beer sales in the park for those events. It may happen, but right now it’s a Fyr Bal exclusive.”

Fyr the Byr and six other beverages from Wisconsin craft brewers (see list below) will be available during the fest from 10 am to 10 pm.