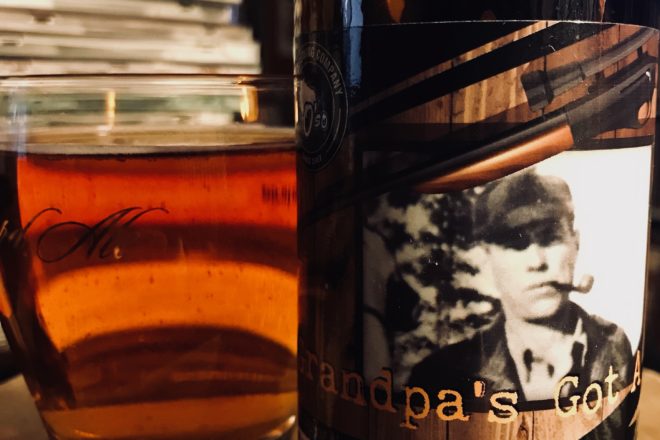 Of all the beer names I’ve run across in a long lifetime of drinking beer in different parts of the world, I do believe this one tops them all: Grandpa’s Got A Gun from O’so Brewing of Plover, Wis.

What does that mean?

Is it a warning? Look out – Grandpa’s got a gun, and he’s off his nut again?

Is it a simple statement about being a Wisconsin resident – Grandpa’s got a gun (and whose grandpa doesn’t?).

I have no idea what it means. But when I saw it sitting on the shelf, with a black-and-white photo of a pipe-smoking fellow in what looks like a Stormy Kromer hat staring out in a deadpan manner from the label, well, I was curious.

All of that was intriguing, but what convinced me to buy the single-bottle offering was the description:  Maple Strong Ale Aged in Used Oak Brandy Barrels.

Well, the “Used” kind of put me off. Could have left that off because “Brandy Barrels” implies that they have been used previously to house brandy, but, perhaps, that is just me bringing my copy editing to the fore. Perhaps not everyone realizes that brandy barrels have been used to age brandy. Maybe the barrel maker was named Brandy. You’re a fine girl … What a good wife you would be … Yeah, your eyes could steal a sailor from the sea …

But I digress. A funky beer name like Grandpa’s Got A Gun will do that to you.

According to the O’so website, this is a 12 percent strong ale that was aged for eight months in the “used” brandy barrels. It also says more than “20 barrels of Wisconsin Maple Sap” were used in the making of this beer.

Hmmm. That may explain why I’m not getting the maple syrup flavor I first expected. Maple sap and maple syrup are two different things. I once made maple syrup, and if I remember correctly, it took five gallons of sap to make a single pint of syrup. Or was it a quart? I forget.

However, I did use raw sap as the main liquid in a beer competition called Iron Brewer, in which all contestants received the same ingredients, but they could introduce one other ingredient to make it their own. Instead of five gallons of water to brew the ingredients I was given, I used five gallons of sap to make a Sap Happy Porter.

But instead of maple sap, I used a box elder in my backyard. Yes, I know, box elder is not maple, but I did my research first, and in Canada box elder is known as Manitoba maple.

In a pinch, birch sap can also be turned into syrup – birches have less sugar content than maples, but of the several varieties, paper birch has the sweetest sap.

But again, I digress.

No syrupy taste here, but the flavor of this beer reminded me of my first English barleywine, tasted in the summer of 1974 when I was living in the village of Bicker in Lincolnshire. Big, bold flavor. Malt and alcohol dominate. It’s a beautiful, brandy-colored liquid with just a tease of grayish-white head hanging on the edge (another grandpa reference?).

Really, you could almost mistake this for a glass of booze rather than beer.

And, I think, that explains Grandpa’s Got A Gun.