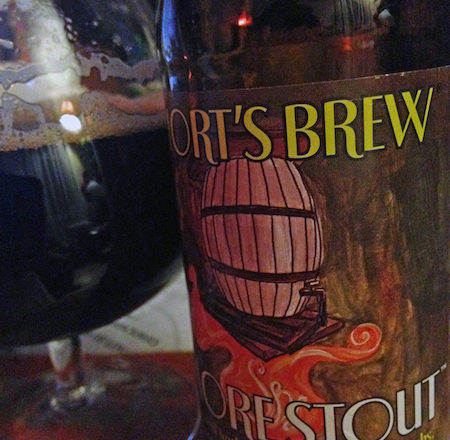 Who could pass up a stout brewed with graham cracker crumbs, chocolate and marshmallows?

Well, not me in my current post-vegan mode. In the vegan days, marshmallows were off limits. I won’t explain here. You can look it up.

Back to beer. The only thing missing from this one is the campfire smoke, and maybe a singing of “Kumbaya.”

I drove four hours roundtrip to buy a sixer of Short’s Brew S’More Stout (and some other stuff), the harrowing return trip in a blinding, fog-bound snowstorm.

Despite the certain feeling of doom while driving blindly at 70 mph in the middle lane of Highway 41, in the here and now, with a snifter full of S’More Stout in front of me and a mid-February wind shrieking outside and making my windows rattle and moan, it somehow seems worth the awful near-death experience to buy this beer.

Or maybe everything feels OK in hindsight as long as you survive to have another good beer.

Not that I’m a S’more fanatic. But I am interested in beers that attempt to replicate familiar flavors, so S’mores stout, hell yeah!

If you relax and allow this beer to work its magic, the graham crackers are the first to reveal themselves. Chocolate is next. Marshmallow is a more elusive element, but if you don’t have a taste for horse hide and hoof (AKA collagen), maybe that’s OK.

After all, what is marshmallow but gelatinized sugar? Another name for gelatin is collagen, which comes from sources you don’t want to know. See above.

So, despite not getting the full S’more effect, this is a delicious, incredible stout that I would be happy to drink every day. 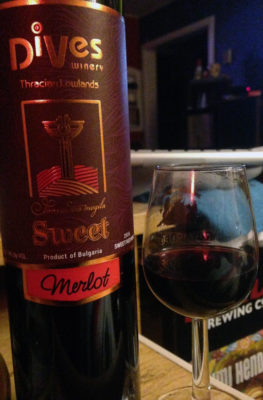 And here’s something else I wouldn’t mind having daily access to – a dessert merlot from Bulgaria.

It’s from a winery called DiVes.

Have you have eaten jam with a spoon? I have. This comes on like a big spoonful of berry jam, a mix of raspberry and blackberry, with a blackcurrant finish.

It’s billed as a sweet wine, but sweet-tart is more in line with its reality, which is a beautiful thing. I also picked this up on my four-hour drive, and now that the slender bottle is empty, I wish I had purchased an entire case of this lovely Bulgarian wine.

If anyone knows where I can find this without driving far out of the county, please let me know.