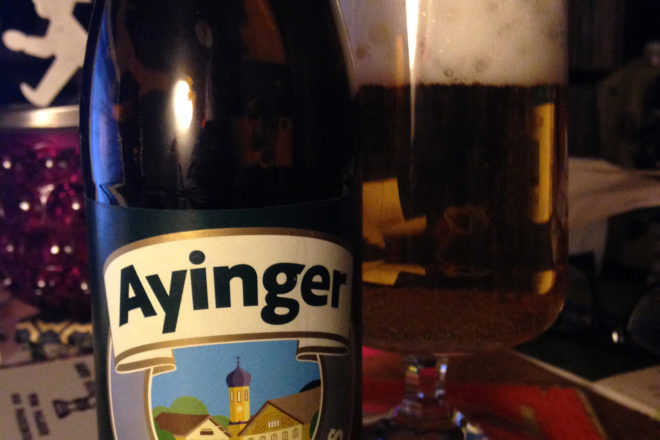 Shortly after His Majesty Jigme Singye Wangchuck, the Fourth Dragon King of Bhutan (1972-2006), began his reign of the small, Shangri-La-like Buddhist kingdom on the eastern edge of the Himalayas, he opened his country to the outside world with tourism.

You have to wonder if he did that in order that the world could view the reforms he had in mind for his otherwise obscure country, especially his concept of Gross National Happiness (GNH).

Worthy goals for any government, no doubt.

However, surely there is more to life and happiness. How about having an Ayinger Bavarian Pils for the first time in America?

Yes, the GNH factor definitely went up with Merchant du Vin bringing Bavarian Pils into this country for the first time.

I got the word last week in an email from Craig Hartinger of Merchant du Vin. I emailed back, saying I was looking forward to tasting it, to which he informed me that it hasn’t gotten to us yet. Chicago, yes. Door County, no.

So he asked if he should send me a sample. Is the King of Bhutan a happy man?

A bottle arrived via UPS on Monday morning. It’s Tuesday night, and I’ve been thinking about that bottle of beer since then.

I’ve never met an Ayinger beer I didn’t like, from the goaty Celebrator Doppelbock to the malty Oktoberfest, but this is the first time Bavarian Pils has been available here.

Perhaps you know I love a good lager and this is one of the very best. The beautiful golden clarity of this beer is truly jaw dropping. How can something look so golden and pure?

Then there’s the inviting rocky head on top. Makes me want to climb a foamy mountain.

And, finally, I lift the glass to my lips. Oh, man, my GNH is off the charts.

This is one beautiful beer. The taste is so smooth with lovely malt sweetness, a crisp carbonation and a tasteful hop bite at the finish.

Elegant. Exquisite. And just the simple ingredients defined by the Reinheitsgebot Purity Law of 1516 – water, grain, hops (and, eventually, yeast when it was “discovered” by Louis Pasteur in 1857).

This is lager of the highest order and it makes me feel that Gross National Happiness is a real possibility now that Bavarian Pils has come to our shores. Or, at the very least, this world has to be a better place with Bavarian Pils available to us.

Drink up and be happy!