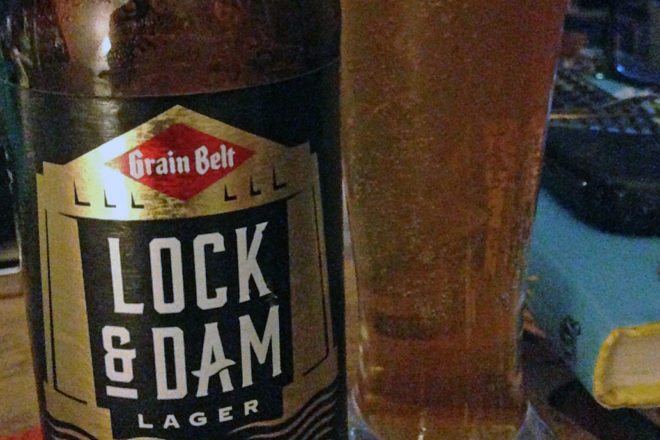 Back in the dark ages, before the craft beer evolution/revolution, when America was awash in lagers, all beer lovers had their brands or go-to beers.

Growing up in Duluth, we were bombarded with ads for Hamm’s Beer “from the land of sky blue waters,” but I was always a Grain Belt fan. I liked the name. I liked their diamond-shaped logo and Old English type. I liked the classy gold, white and red cans. And, most importantly, I liked the malty taste of Grain Belt.

If I wanted something more hoppy, I might go to Pabst, Heileman’s Special Export or Ballantine’s Ale, but had you asked me to name my desert isle beer, it likely would have been Grain Belt.

I wasn’t alone. When I shipped out of Duluth at the age of 18, working my passage on a Norwegian tanker named the Anja, one of the first sights I was shown on board was the empty room the bosun had filled with cases of Grain Belt he bought when they made port in Superior.

By the way, of all the ports in the world these guys hit – just for example, on my voyage we hit Chicago, Hamilton, Montreal and Liverpool, which is where I got off; from there the Anja went to another British port, then to Rotterdam, and then a 37-day voyage to Australia – they said Superior was their favorite port for two reasons that I think I will not mention here. But one was cheap booze.

So, on a recent visit to Duluth/Superior, I felt my heart flutter upon spotting a Grain Belt new to me, something called Lock & Dam Lager.

Seeing that Grain Belt diamond logo sent all the Grain Belt memories flooding back – the bosun braining himself by walking into something steely in the ship after spending too much time in his Grain Belt room; shooting steely blue cans of GBX malt liquor in Chester Creek; and the beautiful golden look of a freshly poured Grain Belt with the late afternoon sun slanting through the window as I’m playing pool for money with a one-legged biker at the Tempo Peanut Bar in Minneapolis; Roberta Flack singing “Killing Me Softly” on the jukebox as the bartender at Mayor’s Brass Rail in Superior pours me a pitcher of Grain Belt without asking for ID.

The Grain Belt of my youth is not the Grain Belt of today, and I mean that the original Minneapolis brewery went out of business in 2001. The brand was purchased and revived by August Schell Brewing Co. of New Ulm, Minn., and cheers to them for that!

I love me a good lager, and Lock & Dam is a good lager. Solid. Crisp. Clean. All the qualities I look for in a quality lager.

It pours a dark gold – some, like the brewery, might say copper – with a rocky white mountaintop of head. The taste is a solid balance of malty sweetness and a hoppy bite. Lots of palate-pleasing things going on for a “simple” lager.

The meaning of the name escaped me, so I turned to grainbelt.com, and the February 2016 announcement of the new Lock & Dam.

“Inspired by the Mississippi River and the hard working lock & dam that powered the original Grain Belt brewery, the latest addition to the Grain Belt lineup also celebrates the brewery’s acquisition of another Minneapolis icon, the Grain Belt Beer sign. August Schell completed the purchase of the Grain Belt sign in January 2016.

“‘Grain Belt got its start right here on the Mississippi, powered by St. Anthony Falls and the dam,’ said Ted Marti, president and fifth-generation descendant of brewery founder August Schell. ‘We are proud to honor that heritage with a brew inspired by the place and hardworking people who gave us our start.’”

It makes me wish I could be in a small Minnesota tavern, or maybe a bowling alley, on a Saturday afternoon with Lock & Dam on tap, served in elegant lager glasses, or, maybe even better, in bottles and small barrel glasses. The sun slanting in. All is right in the world.