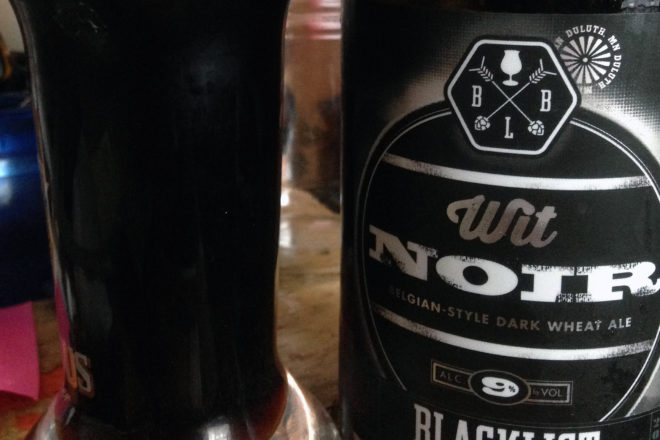 During a mid-day walk on the mean streets of Egg Harbor, I paraphrase Kris Kristofferson:

I’m wishing, Lord, that I was stoned

‘Cause there’s something in a Labor Day Monday

That makes a body feel alone…

Back at the lair, I reach into the magic fridge and hope for the best. Out comes a bomber bottle of Wit Noir, a Belgian-style dark wheat ale from Blacklist Artisan Ales of Duluth, Minn.

It pours black as the ace of spades.

The brewery describes this as a cross between stout and Belgian wit. Who could not like that? They even toasted the coriander, which is one of the traditional elements of wit, but toasted, it lends to the sturdy stoutness of this beer.

This is one of the richest beers I have had in a while. I’m getting tons of chocolate – milk and dark. Dark-roast coffee. Something smoky and delicious that I can’t put my finger on – charred meat? A little black licorice. Blackstrap molasses.

Be sure to use a wide-mouthed vessel so you can take a big whiff with each sip, because the aroma of this beer is full of dark secrets.

If I were to pair this beer with something, it would be a movie, and, in particular, a film noir.

Or how about jumping ahead 10 years to the early Coen Brothers neo-noir, Blood Simple? Great performances from M. Emmet Walsh and Dan Hedaya, and the film debut of Joel Coen’s wife Frances McDormand.

Dark secrets in each. That’s why I like that Blacklist chose to name this beer Noir Wit rather than Black Wit (although that name has tons of potential as well).

Me, I’m going for Edgar G. Ulmer’s Detour, a 1945 movie that in my humble opinion is one of the film noir greats, despite its obvious low budget. Ann Savage, the appropriately named co-star, gives the most savage portrayal of a femme fatale in film history. Evil and darkness incarnate. “Whichever way you turn, fate sticks out a foot to trip you.” Yes, it should go very well with this beer.

I love the sad sack star Tom Neal’s assessment of femme fatale Vera after picking her up on a highway in a stolen car: “Man, she looked like she had been thrown off the crummiest freight train in the world! Yet in spite of that, I got the impression of beauty, not the beauty of a movie actress, mind you, or the beauty you dream about with your wife, but a natural beauty, a beauty that’s almost homely, because it’s so real.”