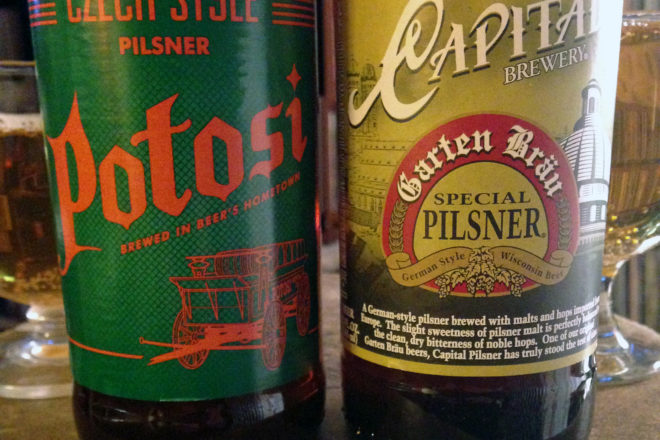 Here was a bad idea – picking up a sixer of two different Wisconsin craft lagers, one a Czech-style pilsner and the other a German-style pilsner, and then deciding to sample them together.

Who does that? Aren’t you just setting yourself up for failure? Aren’t you asking for a good punch in the face? There’s nothing to hide behind in pils. You gotta let it all hang out. Something’s gotta go wrong!

And here it is immediately.

If someone says to me “Czech-style pils,” I expect a spectacular, clean, crisp and softly balanced lager, maybe just a hint of spiciness from the Saaz hops. In short, I expect a world-class beer. If you can’t deliver that, then just call it a pils or American new lager, or, really, anything other than a Czech-style pils because that is a very high bar you have set yourself. And people who like Czech-style pilsners don’t like being fooled by all hat and no cattle nonsense.

Czech-style pilsner is a high bar because there is nowhere to hide mistakes, and this particular Czech-style pilsner seems riddled with them. Too hop-forward, for certain, so no balance. The first pour seemed a bit cloudy, which is not a hallmark of Czech pilsner, and the second pour was positively cloudy, with suspended solids bobbing around until the slightly hazy liquid turned positively turbid.

I think if this were my first Czech-style pilsner, it would also be my last. No, I wouldn’t want another.

In short, this is not the Czech pils my mouth and eyes know. I hate to name the brewery. How about if I just say the brewery name sounds like a slobbery sneeze subdued.

OK, on to Garten Brau Special Pilsner, a German-style pils made by Capital Brewing of Middleton. Well, Capital made its name as one of the pioneer craft breweries in the state, and they hung their Tyrolean hats on the German brewing tradition with this, their original flagship beer.

Garten Brau Special Pilsner looks like liquid gold, which is just how a German pils should look. The taste is there as well, with a mouthwatering balance of sweetish pils malt and the dry finish of Noble hops. It’s the kind of taste that as soon as it winds down in your mouth, you want another sip so all the happy taste sensations happen all over again.

Many things may have changed since Capital brewed its first batch of pilsner in 1986, but its standards obviously have not. This remains a classic craft beer.

Beer and chocolate lovers take note:  On Tuesday, March 27, at 5:30 pm there will be a beer and chocolate pairing at the Donald and Carol Kress Pavilion in Egg Harbor. Join the always interesting Ryan Castelaz of Discourse (and formerly of Bier Zot) for a pairing of beautiful beer and chocolate with award-winning chocolatier Lisa Nelson of Roots Chocolates in Wisconsin Dells. The pairing is $30 and includes four courses. Guests are welcome to bring a bottle of beer or non-alcoholic beverage to share after the class (the non-alcoholic part was part of the press release – I do not recommend that route).