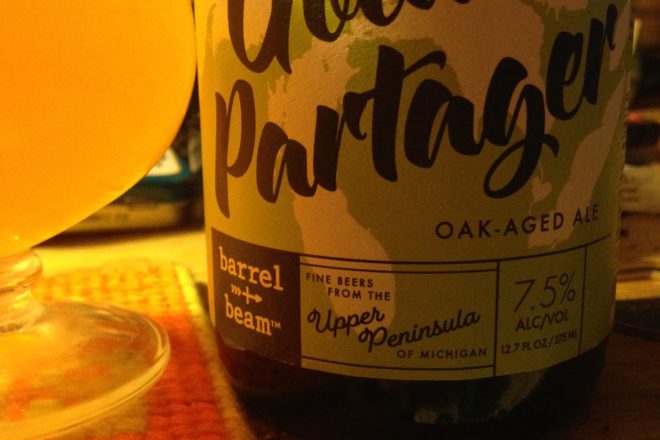 Whoa! Got a gusher here!

But let me start at the beginning…

Still suffering from a slight case of beer fatigue, I was happy to see a new brewery represented in what looked like a series of barrel-aged farmhouse ales in bottles that look like miniature wine bottles, from a Marquette, Mich., brewery called Barrel + Beam (I really had to hunt for that flipping plus sign on my keyboard – I’m sure it’s the first time it was ever used).

The beer I chose is called Golden Partager, described on the label as “oak-aged ale.” But what really stuck out and caught my eye was the 7.5 percent abv. The other beers from the brewery were lower, ranging from 5 to 6.5 percent. I felt like starting at the top.

Partager. Hmmm. No idea. Maybe a Yooper expression? Is that how they say partridge up there?

Or could it be French? I say that because even though I took a year or two of French, I never was able to crack that nut. Still struggling with English. Whenever a word really puzzles me, it almost always turns out to be French. Or Croatian.

According to Collins French-English Dictionary, partager means to divide or share, as in, “Il fait partager son enthousiasme,” which in the language I speak means “His enthusiasm is infectious.”

That was my first thought when the Golden Partager came bursting out of the bottle, but that’s not even a nice thing to think about a brewer, let alone say out loud. In reality, it was just a little premature partagercation.

I like this beer. A little bit tart, with a cascade of flavors that ripple across the palate like old pals happy to see each other again. Very refreshing. A nice prickle of carbonation. Light yet complex.

The website says it’s brewed with Michigan-sourced malt and hops, and then aged in a barrel with brettanomyces bruxellensis, a wild yeast isolated from brewery cultures in Brussels, home of delicious sour browns and lambics and related exotic brews.

You know what they say about good old brett brux? They say it produces a “sweaty horse blanket” character, but since I don’t run with a horsey crowd, I have no idea what that means. Sounds very Princess Anne to me (was she the horsey one? Maybe that was Margaret. I can’t remember…).

Anyway, nothing like a sweaty horse blanket happening here. Really, just the opposite, because that sounds so heavy and this really is a delightfully light yet interesting beer.

I look forward to visiting this brewery some time in the not-too-distant future because I like their style, even if I don’t get the lingo.