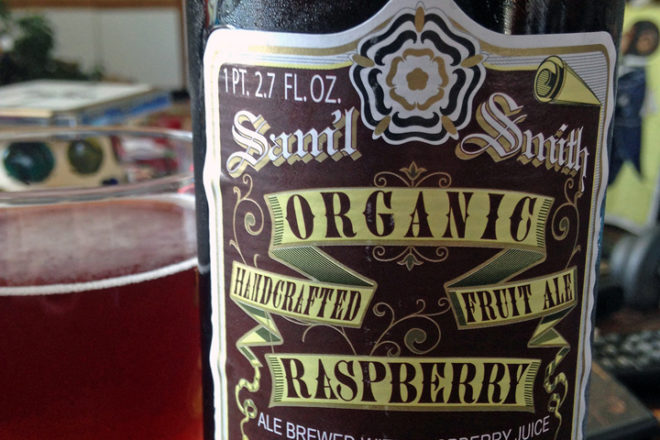 After a foggy morning, the sun poked out by midday and it felt like the first day of summer, even though the actual first day of summer was still a few weeks away. I hopped on my bike, spun around the village and worked up a mighty thirst.

I knew even before I pointed my bike in the direction home what I was going to have when I got there because I’ve been seeing it every time I opened the magic fridge the past few weeks. The master entice these past weeks was Samuel Smith’s Organic Raspberry Ale.

Drink me! Drink me! It said those words every time.

And each time I answered, next time or later. Not today.

When I get home, I pop in the Jethro Tull DVD Nothing Is Easy: Live at the Isle of Wight 1970 just to prime the pump of Englishness, so to speak. The Tull boys formed in 1967 in the town of Luton, a place I got to know well in the mid-1970s as sort of the cultural center of the area I lived in at the time – at least for first-run, mostly American films and concerts. I saw things such as the 1976 King Kong there, three Woody Allen’s (Love and Death, The Front and Annie Hall), Dustin Hoffman going on a mad rampage in Straw Dogs and the emergence of Sylvester Stallone via Rocky, to name just a few. So this seemed fitting music for this proud product of England.

The pour produces the holy trinity of raspberry: aroma, color and taste. I don’t know what more I can say other than with each sip I feel like a much better person, one who can even forgive Clive Bunker’s incessant and interminable drum solo on “Dharma for One.”

It’s just such a pleasant liquid that you want to forgive many things. With a sip of this I can close my eyes and see myself punting once again on the River Ouse in Bedfordshire with a

picnic lunch and a few bottles of great English beer. Picture yourself on a boat on a river…

If we could somehow add a tap of Sam’l Smith’s Raspberry Ale to everyone’s home so we all could have a glass a day, the world would soon be a better place. We can all wear raspberry berets. Or am I speaking through raspberry-tinted glasses?

Peace through brewing, I say, but with this warning from Tull, nothing is easy.