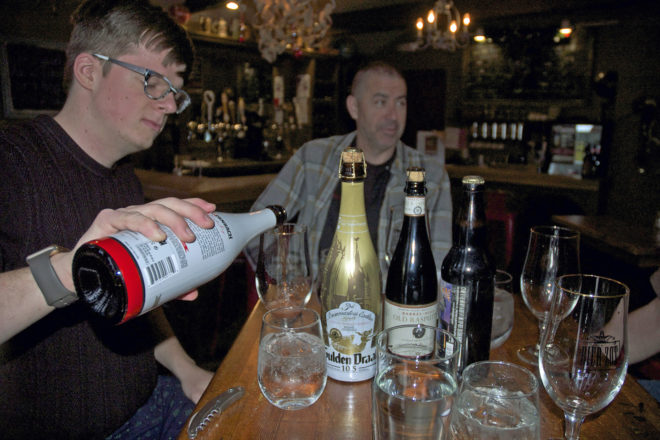 I was really looking forward to taking a Trip in the Woods, which is the venerable Sierra Nevada’s Narwhal Imperial Stout aged in bourbon barrels with red and black currants.

Currants? Sure. Why not? 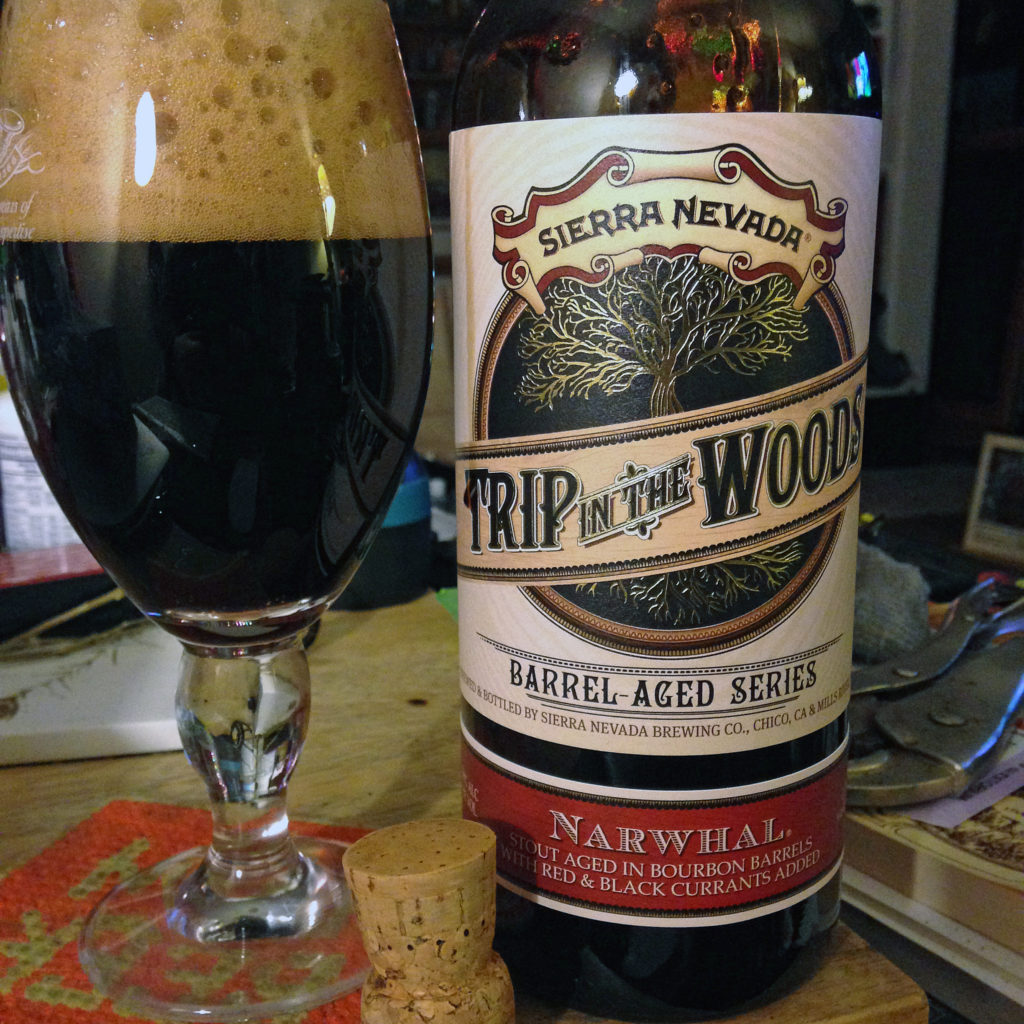 Malty Narwhal is always a winter treat, but this promised so much more – whatever nuances the bourbon barrel and the tart currants bring to the show. The elegant bomber bottle sat there for two longs days until I had some time to sit down with it. But it called to me the whole while.

It feels very thin at first, and then erupts into a burst of layered flavors – Devil’s food cake, a little coffee to wash that down, and then a titillating tart finish that just won’t quit. And finally on the very end, a nice little ethanol burn from the residual bourbon. Wow!

So, in essence, this great West Coast stout has become a sour stout. Brilliant! The flavors work so well together, and they seem particularly appropriate for the holidays – dark and tart.

I’d love to put a bottle of this stuff away for Xmas 2017. Curious to know how the tartness reacts to time. I just don’t have that kind of discipline. My beer cellar – a random section of the magic fridge – is down to a single bomber bottle. Shame on me for that. I’ve been paying too much attention to my record collection and not enough to my beer cellar.

This shame was spurred by a recent sitdown to sample some of the beers that will be featured at Bier Zot in Sister Bay during a celebration of dark beers they are calling Holly King Festival, Dec. 15-17. You can learn all about the fest here: bierzot.com/holly-king-festival.

We sampled an incredible array of beers from Unkefer’s 800-plus bottle cellar.

We began with a 2013 Rodenbach Caractère Rouge, a Flanders red ale with cherries, cranberries and raspberries. The raspberries especially shine through on this delicious liquor.

Then we went to a 2012 Alaskan Baltic Porter. Big bold flavor in this big-bodied porter that includes vanilla beans, dark cherries and French oak chips.

Next was a 2015 Gulden Draak that had been aged in whiskey barrels. I must have really enjoyed this beer because all my tasting notes say is “Sublime. Sublime.”

That was followed by a barrel-aged Old Rasputin XIX, North Coast Brewing’s famous Russian Imperial stout. So soft and sophisticated!

And then I met my second double American stout on the very same day in the form of a 15.6 percent 2013 Mephistopheles from Avery Brewing. It was a barrage of velvety darkness. Ryan said at the fest they will also have Avery’s Tweak, which is Mephistopheles on coffee and weighing in at 17.5 percent. Tweak used to be called Meth Head but the Name Police felt that was just too much.

Then we went into The Abyss, a 2015 edition from Deschutes. Aged in oak wine barrels, infused with cherry bark, blackstrap molasses and vanilla. And weighing in at 21 percent. Once in The Abyss, you never get out!

We ended with dessert, and what turned out to be my favorite of the day – a 2014 Goose Island Bourbon County Stout. With no carbonation and an almost reddish-hue, this exquisite liquid tasted more like port than beer. And I do love port!

I guess I didn’t take very good notes. We talked about each beer, and reveled in their individual qualities, but that’s something you can do yourself by attending the festival.

This is beer festing 2016 style, with exotic beers in an intimate setting with a lot of thought spent on foods to pair with the beers. The Bier Zot guys say we can look forward to a summer solstice beer fest from them as well. But for now, let’s embrace and cherish the dark.