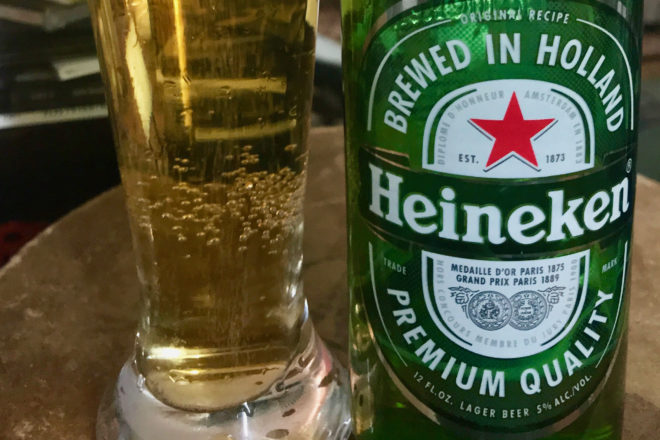 I started watching the old HBO series The Wire on Amazon Prime and was struck by how brash Baltimore cop Jimmy McNulty – played with great American panache by English actor Dominic West – is often drinking what he refers to as Dutch beer. I was reminded that it has been a very long time since I’ve put a Heinie to my mouth.

So I picked up a sixer. There was a time before the craft-beer evolution/revolution when Heineken was the mark of the Rico Suave beer drinker. Very continental.

And that is precisely what the Dutch brewer wanted you to believe about the brand, at least according to the 2013 Dutch mini-series Freddy Heineken. As long as I was drinking a Heineken, why not learn more about the company by watching this two-part series on Netflix?

Well, you learn some tidbits about the company, such as that it used to be known as Heineken’s until Freddy became the third generation to steer the company his grandfather founded. Freddy found the apostrophe confusing. When a young hotshot in the company pushes behind Freddy’s back to have the brewery produce a generic supermarket beer of the same quality as Heineken, Freddy asks, what will people think if they can buy the same beer at half the price?

But mostly you learn what a duplicitous, greedy, philandering, self-centered sad sack Mr. Greenbottles – as his pal Frank Sinatra called him – really was.

The mini-series encompasses a series of flashbacks of Freddy’s life while he and his driver, Ab Doderer, are confined during a 1983 kidnapping. The last third or so of the series’ second part concerns Freddy’s post-kidnapping decline, and by this time, the brewery barely figures in the story.

So, I take another sip of the Dutch lager in the green bottle, and it is heel goed (which my internet translator tells me is “very good” in Dutch). Sweet, slightly skunky green bottles.