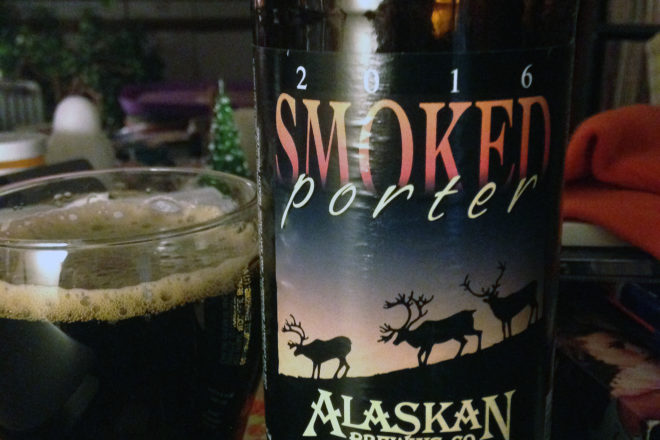 I was eagerly eyeing a bottle of brown sour ale when my eyes were distracted by heavily branched cervidae (elk? caribou?) parading across the label of a bomber of 2016 Smoked Porter from the Alaskan Brewing Co.

Sorry, sour brown, but I’ll have to see you later because it has been way, way too long since this particular smoked porter has passed my lips.

Alaskan Brewing’s Smoked Porter was famous and largely unattainable in the early days of the craft beer evolution/revolution. We here could only read and fantasize about it. I don’t know if it had distribution outside of Alaska at that point, but it was definitely an unknown beer in this region.

Then one day out of the blue I was contacted by a guy who had a connection. I forgot if he went or someone he knew went, but someone had gone to Alaska and brought home some Alaskan Brewing products, including Smoked Porter. I’d never met the guy who contacted me, but he invited me, a complete stranger, over to his house to drink some Alaskan beer.

It was a very sweet gesture, but so many years ago I can’t remember if it was this century or the last. Worse yet, I can’t even remember the guy’s name, which doesn’t seem right when a guy offers you a rarely seen beer. What kind of cad drinks a man’s rare beer and then forgets his name? Me, I guess. Sorry, guy!

This 2016 iteration of Smoked Porter is incredible. The label tells us that the brewery “applied the Alaskan tradition of alder-smoking to the malts” used in this 6.5 percent porter. Apparently alder produces a lighter smoke that is suited for fish, which, I understand, they eat a lot of in Alaska.

Alaska’s Smoked Porter is nowhere near as smoky as the classic German Aecht Schlenkerla Rauchbier (which is a bit like drinking liquid bacon), but the smokiness is ever-present in the rich dark malts of this beer. It makes me think of Earth and the elements. Magma.

Times have really changed. Twenty-five years ago we beer lovers fantasized about easy access to excellent beers, but never in our wildest dreams thinking someday we could walk into the local supermarket or even gas station to buy Alaskan Smoked Porter from among the miles of aisles of craft beer. How far we have come in my lifetime! Maybe the human race isn’t as backwards as I thought.

Here’s another response to a question I asked a few weeks back: What’s in your fridge (or what’s your go-to beer)? Homebrewer Rich Wolter, who brewed a delicious barleywine that won the 2014 Door County Homebrewing Contest, offered this: “I always keep a few bottles of Miller Genuine Draft in the back of the fridge. Truth be told, they’re more for a friend of mine who, whenever he comes over and I ask him if he wants a beer, says, ‘Sure, just don’t give me any of those froo-froo beers of yours that you have in there.’ I suppose I should be offended and consider getting a higher quality friend, but then I think, hey, that means more froo-froo beers for me. And I happen to like froo-froo beers. But on a hot summer day, I guess an MGD would do in a pinch.”