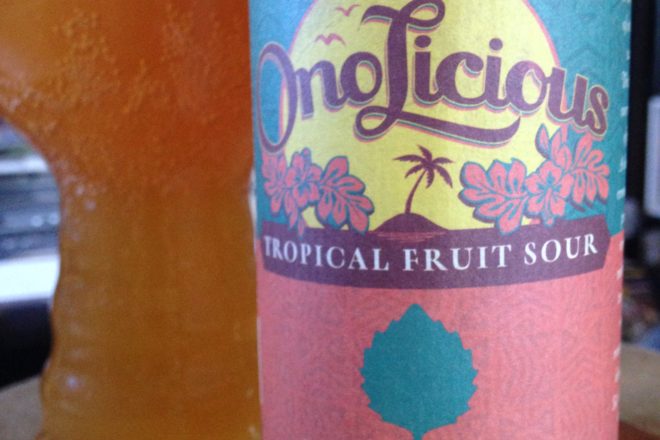 It’s another gruesomely hot day and I’m thirsty for something completely different. And then I see it – a fish beer called OnoLicious. It must be made with the large and ugly tropical fish known in Hawaii as Ono and elsewhere as Wahoo.

But then I read on the label that this is not a fish beer but a tropical fruit sour. Oh, I see where the problem is. They meant to use the Hawaiian word ‘Ono, which means delicious. Note the open quote mark at the start of ‘Ono. It is called an “okina” and it represents the glottal stop in words such as “oh-no.” When the okina precedes ‘Ono, that is the Hawaiian word for delicious. When the okina is missing from Ono, that is referencing the fish.

So maybe everyone has not lived in Hawaii and does not know these subtleties, but to those who do, this is funny stuff. Not that I really thought it was a beer made of tropical fish, but that is the literal reading of the name OnoLicious.

Oh, well. No matter for it is a very tasty sour with tropical fruit notes.

One aroma definitely rings a bell and I think papaya. We used to grow them in the backyard on Maui (along with buttery cannonball-sized avocados).

I search for other distinct tropical smells and flavors such as mango and pineapple but rather than finding them individually they seem to have clustered into a general sense of tropical fruitiness.

OnoLicious is a 2018 offering in the Cellar Series from O’Dell Brewing of Fort Collins, Colo., which only recently made itself known through distribution in my part of the world. The label tells us that folks in landlocked Colorado often dream of tropical beaches and breezes. This 6.5 percent sour could certainly help that dream along.

While the label simply states that this is ale brewed with tropical fruit, another part of the label actually does mention guava, mango, passionfruit (known as lillikoi in Hawaii) and tamarind. I have to admit I have no idea what a tamarind is. I know it’s popular in the Philippines, but I’ve never run across one. The flavor of passionfruit I had forgotten, even though it grew on my deck (or lanai, as it is known in Hawaii), but now that it was pointed out to me, I absolutely recognize its high tartness at the very top range of the flavor profile. No mention of papaya, so I guess I was off there.

I have to wonder what would happen if instead of building the sour on a cocktail of tropical fruit, the base ale concentrated on just one of those tropical fruit profiles at a time – lillikoi, mango, papaya, guava, pineapple, kiwi, and maybe even just a little Ono, for shock value. Just the lips. A kiss of Ono.