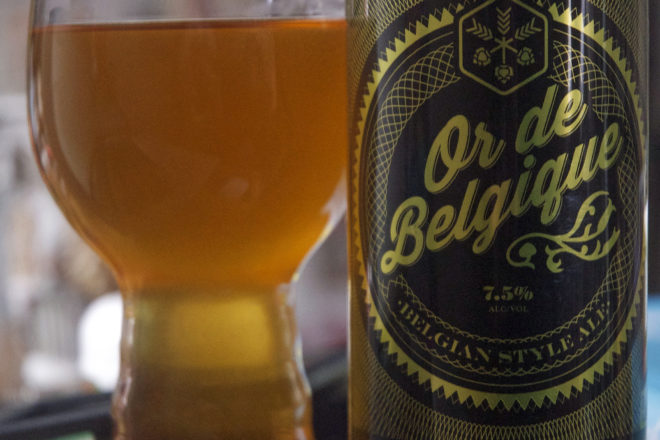 My, how far we’ve come. When I left my hometown of Duluth, Minn., some decades ago, the city’s oldest and only surviving brewery, Fitger’s, had been closed for several years.

Today, Duluth is something of a craft beer Mecca. If only my younger self had realized the beer evolution/revolution was even coming to faraway-from-everything Duluth, well, who knows?

I was happy upon a recent whirlwind visit to old Duluth to find one of the newer craft breweries specializing in Belgian style beers. I did not have time to stop at the taproom, but I did pick up several styles, including the 7.5 percent Or de Belgique (or Gold of Belgium).

Gold is right! In addition to its golden, slightly hazy glow in the glass, this rich, flavorful golden ale has a delicious warming effect, as a good Belgian golden should, so that’s gold right there.

Oh, I like the packaging of this beer, too. It comes in a pint can done in a classy Spirograph style. What ever happened to Spirographs?

I don’t quite know what to say about that very special Belgian aroma, which this beer has. Malty, slightly funky, earthy.

It poured with a deep white head that quickly dissipated.

The taste? It’s kind of like biting into a beery apricot that has been infused with alcohol. A definite fruitiness and an undeniable alcohol bite. While doing some research on the place, I noticed a blog where someone said the flavors mask the relatively high alcohol content. I say that person has no taste buds. That review led me to look at a few others – something I don’t normally do – but I was curious about the reaction to Belgian-style ales in Duluth. I saw descriptions of cracked pepper (not flaked pepper or ground pepper or just freaking pepper – it must be cracked pepper), bubblegum, clove, lemon zest and lots of banana.

It made me realize how irrelevant beer reviews are. I really don’t trust someone else to taste beer and give me a legitimate description. Why should I trust their palate? And why should you trust mine?

You shouldn’t. Taste for yourself. And I’ll see you next week.