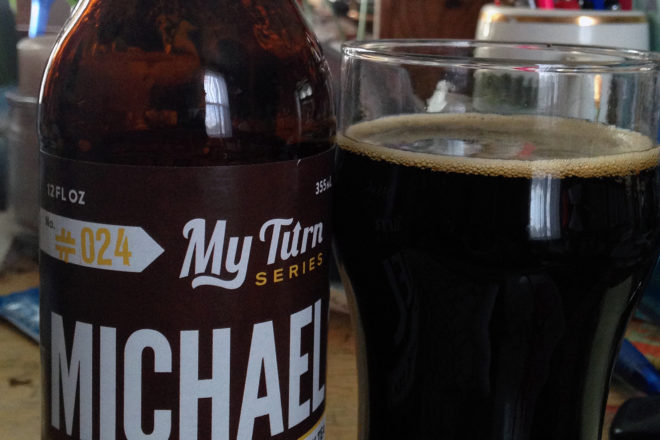 I was excited to see Michael on the shelves recently.

This beer is named for the keg filler at Lakefront Brewery and is No. 24 in the brewery’s egalitarian My Turn Series, where everyone who works for the brewery gets a turn creating a beer for the rest of us.

The six-pack comes with a statement from Lakefront President Russell Klisch about how everybody in the business is involved in making the beer in front of you happen – “from the guy dumping hops in the kettle to the guy putting cases on the pallet,” as Klisch puts it – but most slog away without any recognition of their involvement in the process. Letting each employee create a unique beer is a brilliant idea.

There is also a brief bio of Michael, where it is pointed out that if you’ve had Lakefront on tap, Michael probably put it in the keg you’re drinking from. We also learn that in his free time he reads comic books and William S. Burroughs.

Now that I look more closely at the label, I see the full name of this beer is Michael Brewed A:  Stout with Spiced Black Tea. However, Michael is in 66-point type compared to 6 point for the rest of the name (yes, I actually measured the type with my pica pole; a quick primer, 12 points make a pica, and 6 picas equal an inch).

The spices are, as listed, cinnamon, ginger, cardamom, cloves and pepper. I’m reading that on the stout and immediately think of chai. I’ve been on a chai kick, trying to make a version at home as good as those I’m able to buy at coffeeshops – still working on that, and so far the closest I’ve come is using eggnog as the dairy addition. Is it the commercial latte machines that make the ones I buy so creamy and delicious?

So, of course, I must have this chai stout.

I know spiced beers have their detractors. Well, what style does not? We all can’t like everything. But I think even the spice despisers would have a hard time despising this spiced stout, largely because of the subtlety of the spicing.

It’s definitely there, but in such a warm and harmonious companionship with the classic dry stout base that it seems a most natural collaboration. My favorite part is the lingering pepper finish.

Of course you always have the option of dulling the flavors by serving it cold straight out of the fridge. I keep mine room temperature, which in my room is about 55 degrees many winter days, although with the sun blazing in the big southern window on this last day of 2017, the living room hit a positively balmy 60 degrees, in other words, a beautiful day for a chai stout.