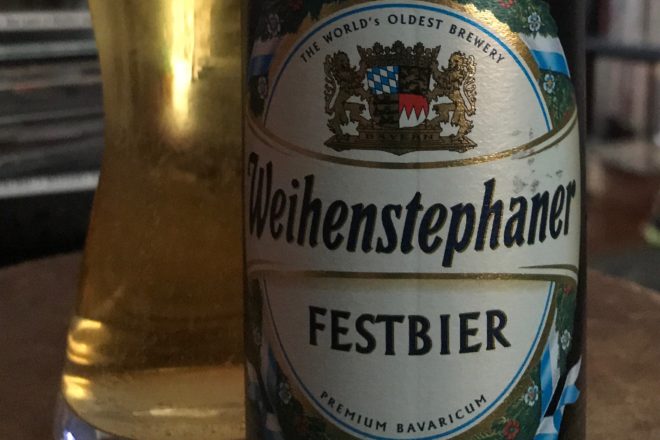 Looking at a tall and colorful display of Oktoberfest beers that includes everything from Leinenkugel’s Oktoberfest to various iterations of Southern Tier’s Pumking – including a coffee-laced version that I’ll have to try sometime – I opt for the one that is going to be very different from the others. It’s the only import among them, and I’m afraid I’ve dissed this beer in the past for its pale color.

I’m talking about Weihenstephaner Festbier, which, unlike all the deeply amber-hued American craft beers in the Marzen style, is a golden lager. The only German Oktoberfests that are not golden are for export only.

Why do Germans prefer golden Oktoberfests? I’ve heard it’s an American influence and the preference some of us have for light beers. So sad.

Weihenstephaner follows this golden trend started by the six Munich breweries, which, in fact, make the only true Oktoberfests in the world. Yes, Munich rules on the Oktoberfest front. The 2019 Oktoberfest in Munich (Sept. 21-Oct. 6) is the 186th festival since it began with the 1810 marriage of Clown Prince Ludwig (whoops, that should read Crown Prince), later to become King Ludwig I.

Yes, I know: The numbers don’t add up. The 200th anniversary should have been in 2010, which means this should be the 209th festival, but cholera and several wars have put an occasional damper on the annual festivities throughout the years.

I’ve never been to Munich’s Oktoberfest, but I suspect it is easier to down a liter mug of this golden lager than the slightly heavier “traditional” amber brew.

Out of all the Oktoberfests on the shelf, I wanted to try Weihenstephaner’s Festbier again because I think I gave it short shrift when comparing it to what I still consider to be the true Oktoberfests, with their rich, malty base and color that screams autumn.

Even in the days before the craft beer evolution/revolution, many regional breweries such as Leinenkugel’s – which was still a regional back then – would produce Oktoberfests that we, the beer lovers of the world, looked forward to each fall. And, of course, there were all the German imports to choose from. It was an exciting time for beer lovers, just as the spring release of Bock beers was eagerly anticipated.

If you want to celebrate Oktoberfest with one of the six Munich breweries, look for Oktoberfests from Augustiner, Hacker-Pschorr, Hofbräu, Löwenbräu, Paulaner and Spaten.

This golden Festbier from Weihenstephaner – the world’s oldest brewery (since 1040) – is a delicious, 5.8 percent lager, but I’m still going to need a good old amber-hued Oktoberfest before the season ends.