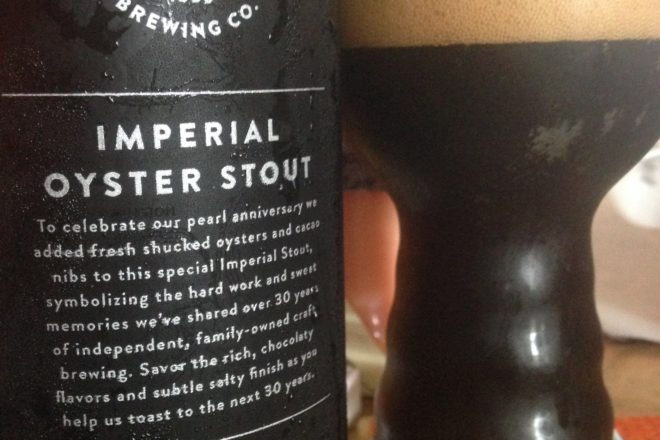 It was the end of a brutal week and I felt in desperate need of a stout, something I could inject directly into my spine in order to buck up.

One in particular caught my eye because it boasted buckets of malt in every bottle, but it’s not my favorite brewery for reasons I don’t want to go into right now. I had a 12-ounce bottle of that beer in my hand as I took a step to my left and my eyes fell on a top-shelf-bomber bottle with three words:  Imperial Oyster Stout.

The bottle in hand went back on the shelf, to be replaced by this 30th anniversary beer from Great Lakes Brewing of Cleveland, Ohio. In the world of wedding anniversaries, the 30th is represented by the piece of calcium carbonate grit that grows into a pearl.

But I don’t think of pearls when I hear oysters. I think of Lewis Carroll, and when a beer makes you think of Mr. Carroll, how can you resist?

The time has come,’ the Walrus said,

To talk of many things:

Of shoes – and ships – and sealing-wax –

Of cabbages – and kings –

And why the sea is boiling hot –

And whether pigs have wings.’

But wait a bit,’ the Oysters cried,

Before we have our chat;

For some of us are out of breath,

No hurry!’ said the Carpenter.

They thanked him much for that.

A loaf of bread,’ the Walrus said,

Is what we chiefly need:

Pepper and vinegar besides

We can begin to feed.’

Yes, I sometimes wonder about the first human who cracked an oyster shell and ate the contents, but even curiosier is the story of the weirdo who decided to drop a few oysters in his stout.

The calcium carbonate in oyster shells has long been known to act as a clarifying agent for beer, so any beermaker using that is, technically, making an oyster beer.

But oyster stout is famously made with the snotty, fleshy thing inside the shell. I do hope they blenderize it or something because it would be very nasty to find slippery oyster parts in my beer.

I read somewhere that the style was traced to early 19th century New Zealand, which seems like a worthy reason for a road trip down under – to visit the original oyster beds that were plumbed to make what could be one of the world’s weirdest beer.

This is a big 11 percent stout with a briny note that I’m guessing is from the bivalve star of this show.

Big, big inky dark beer. It’s also very filling. I had every intention of making a Mexican-inspired dish to go with it. I had all the ingredients to do so. Even started toasting some peppers for a sauce. Halfway through the bottle I realized Imperial Oyster Stout would be my dinner tonight.