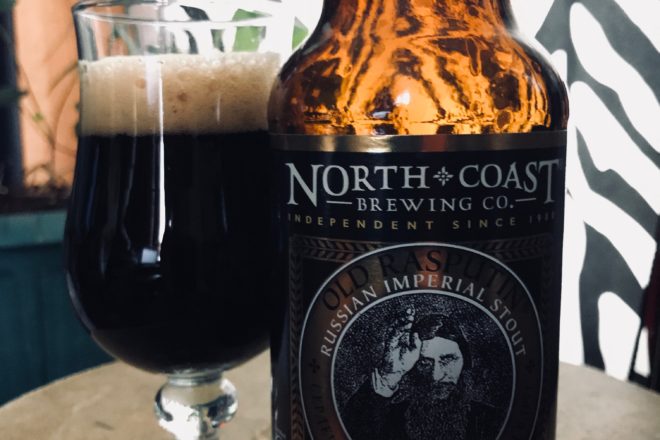 I know I’ve probably done this beer before, but I saw Old Rasputin looking down at me from the shelf like I owed him money or something, so I thought it was time to revisit the Mad Monk and his Russian Imperial Stout from North Coast Brewing of Fort Bragg, California.

This is a big, bold, 9 percent bruiser that tastes like a buffed-up mochaccino,with flavors of espresso, dark chocolate and dried dark fruits rolling off each sip. It’s a beer so dark that light cannot penetrate it.

The label features a rendering of an actual photograph of Grigori Rasputin making a gesture with his right hand.

This beer has won a shelfful of trophies, beginning with the World Beer Cup in 1996 and most recently at the 2018 World Beer Championships in Chicago.

The story of Russian Imperial Stout begins in the late 17th century when Russian Czar Peter the Great visited England and fell in love with English stouts. Attempts to ship the beer to Russia resulted in spoiled stout. Beefing up the malt and alcohol content was the necessary fix to send the beer on the grueling, 1,500-mile voyage.

Because of the high alcohol content, Russian Imperial Stouts can taste boozy, but aging can tame that element. Old Rasputin definitely has the boozy swagger.

I suddenly had a hankering for a Mexican beer. Used to drink a lot of Sol on Maui, so I almost went for a sixer of that. I liked the silk-screened bottles. But then I saw the green Dos Equis bottles and realized it has been a very long time since I’ve had the two Xs.

Turned out to be an excellent choice!

Dos Equis really is an interesting beer, besides the longtime “most interesting man in the world” campaign for the brand, which was recently brought to an end after a younger “most interesting man” failed to generate interest after nine years of the character by American actor Jonathan Goldsmith. I never understood how the most-interesting-man thing was supposed to sell beer, and I’m glad to see the back of that particular ad campaign.

Dos Equis is just a damn good Mexican lager. There’s a sweetness to it that I enjoy. It’s simple, uncomplicated, refreshing and highly drinkable. Who could ask for more?