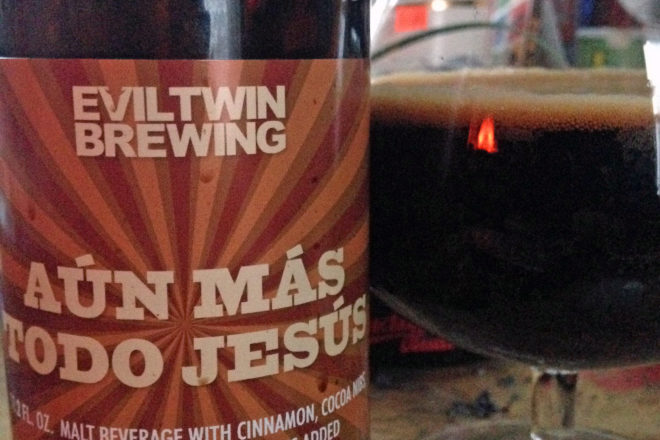 This stuff looked like a cross between ancient motor oil and liquid fudge when I poured it from the bottle into a snifter – dark, oily and infinitely inviting. I couldn’t wait to dive in.

It’s a beer from Evil Twin Brewing and it’s called Aún Más Todo Jesús, which means something like Even More Jesus. It’s an imperial stout brewed with cinnamon, cocoa nibs, chili peppers and coffee beans. They all chime in in their own unique ways in this lovely black beer, and in the way listed, although the peppers linger the longest, but in a most pleasant way. The way the peppers and coffee linger at the back end is a truly beautiful thing.

Oh, did I mention this is a 12 percent monster? From a Spanish brewery?

Well, Evil Twin is actually a Danish invention, founded in 2010 by Jeppe Jarnit-Bjergso as a “gypsy brewery,” meaning he had no physical plant himself but works with existing breweries to produce his beers. Some people call that contract brewing, but gypsy brewing certainly has a less formal ring to it.

Jeppe, who has called New York home since 2012, is opening a brewery there this summer. But until that is in operation, he contracts with breweries around the world to make his beer, and this dark beauty is made by a Spanish craft brewery called Companyia Cervesera del Montseny.

Jeppe’s identical twin brother – Mikkel Borg-Bjergso – runs another gypsy brewery called Mikkeller. Both twins brew highly unusual beers, but, so far, if I had to choose to follow one brother or the other, I think Evil Twin is more up my alley.

According to news reports, the twins have been incommunicado since 2010 (the year Jeppe started Evil Twin Brewing, which was four years after Mikkeller came into being as a brewer of experimental one-off beers). The Twin Peaks fiasco could not have helped.

I look forward to sampling more products from what appears to be an epic case of sibling rivalry.