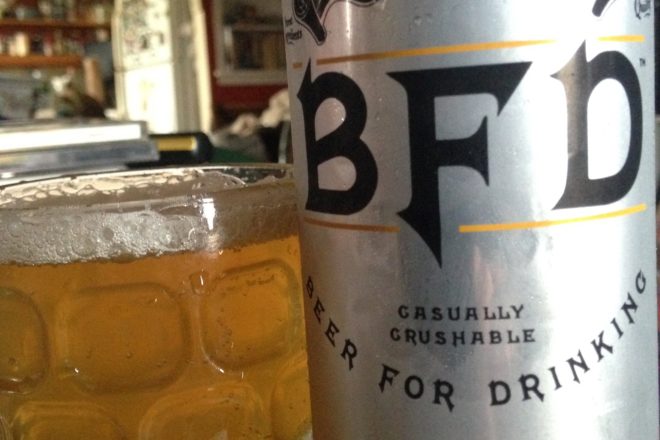 All summer long I saw this one looking down at me from the to-go cooler at my local beer emporium, cheekily calling for me to check it out.

Finally, while gathering ingredients for a quick (frozen) pea soup, I reached up and grabbed a towering 19.2-ounce silver can of BFD from Sierra Nevada Brewing.

BFD, of course, stands for Beer for Drinking. “Casually crushable,” the can labeling tells us.

I would like to know who came up with the lame word “crushable” to mean an easy-drinking beer? And why it caught on? We are as sheep, I fear, so easily led. Next thing you know, crappy American IPAs are going to become popular.

But I digress. I like BFD. Eminently drinkable. Or, if you prefer, crushable. It’s a straw-colored 4.8 percent pale ale.

“This isn’t beer for collecting, this is beer for drinking,” the Sierra Nevada website states.

It may seem a simple beer, but four different malts are used, including acidulated malt, which is used to reduce wort pH, resulting in more intensified fermentation and lighter beer color. The other three malts are  two-row pale, Munich and Pilsner.

And three hop varieties are used. The dual purpose Simcoe is used as bittering hop. For finishing, they used the relatively new (2012) German Polaris, a high alpha acids hop, and Comet, a combination of English Sunshine and an unnamed native American hop, dating to either the 1960s or 1974 (depending on the source). It was known for a big grapefruit flavor but went out of commercial production until a recent revival.

Sierra Nevada also provides potential food pairings, one of which for BFD is Spring Pea Pasta. I think pea soup is close enough.

Perusing the labels of the plethora of autumnal and pumpkin beers that recently appeared on the shelves of my local beer emporium, I walked away. I knew I wanted something like that, but felt overwhelmed by an overload of options.

I continued with the rest of my shopping and let the brews stew in my brain so when I finally returned to the autumnal beer shelf, it was only to pass by as I hooked onto a four-pack of Cold Press Coffee Pumking, an 8.6 percent bruiser from the always reliable Southern Tier Brewing Co. of Lakewood, N.Y.

The label says this is an ale with notes of pumpkin and light roasted coffee. It pours with a nice white head above a golden ale with a pumpkiny orange glow to it.

The beer smells bready, but I am also stuffed up with fall allergies, so that’s all I’m getting.

I’ve had the regular imperial Pumking, a delicious pumpkin ale. The addition of cold pressed coffee – which is not as bitter as brewed coffee – offers a dark note to the proceedings. You can have your pumpkin pie and coffee in liquid form now.