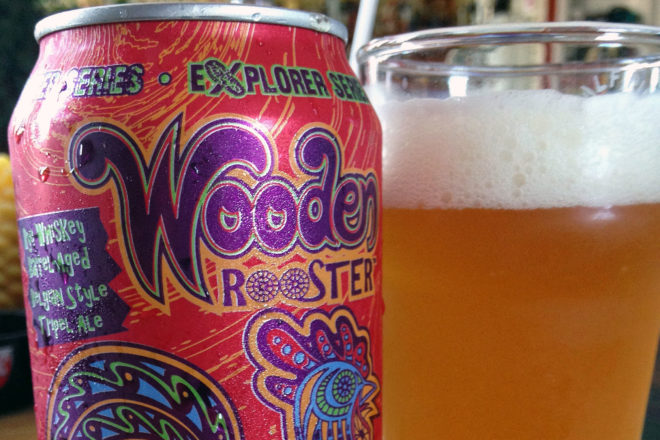 Coming home from work one recent muggy day, I reached deep into the magic fridge and pulled out a can of Wooden Rooster, a rye whiskey barrel-aged Belgian-style tripel ale from Tallgrass Brewing of Manhattan, Kansas.

Tallgrass is the maker of Buffalo Sweat, a beer I won’t drink because of the name, along with Moose Drool, Camel Flop and anything else that suggests animal excretions. Yuk! What are those brewers thinking?

But as long as they don’t name all their beers after animal excrement, I’ll give ’em a shot.

Wooden Rooster is one of the beers in what the brewery calls its Explorer Series. This particular beer was a 2015 release. They took their Velvet Rooster, a Belgian-style tripel, and aged it in a rye barrel, which gives an intriguing fruity, oaky, vanilla spiciness to the resulting tripel. And tripel it is. No mistaking that. All the things I like about a Belgian tripel are here.

Tripel has an interesting history. Being a Belgian invention, you would think the history of tripel dates back centuries. But, no, it officially debuted as a product of the Trappist Westmalle Brewery in 1934.

Or that, at least, is the official story, but I suspect a strong golden ale like tripel existed by some other name in Belgium before Westmalle’s Tripel first appeared 82 years ago. Just a hunch I have.

What makes tripel special? It looks so innocent, sitting there glowing gold in the evening sunlight. You dive in, letting the deep, warming flavors soak into your soul. And suddenly your soul is absolutely hammered and wants to get a tattoo.

Wooden Rooster upholds the tripel tradition at a boozy 9.5 percent. I was so pleasantly beerified after one of these, I might have even accepted a Buffalo Sweat had someone offered.

So I would suggest that should you see a sixer of Wooden Rooster out there, snap it up. All the brewery will say about it being a one-time offering is “never say never.”