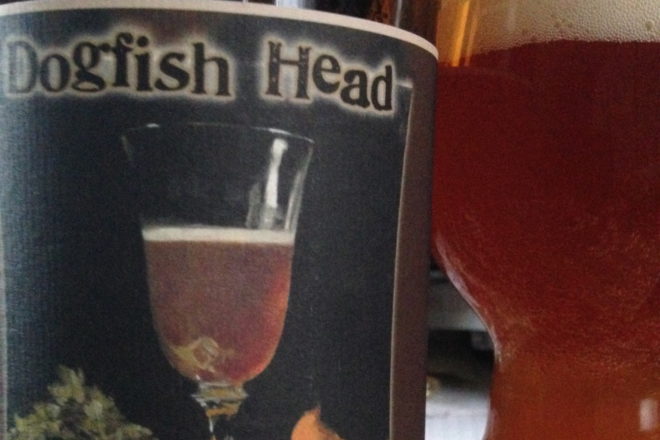 When I poured this beer into a tall glass, its inviting glow reminded me of a tequila sunrise. So it does have that going on – it’s a pretty beer. A golden base laced with orange and red – sunset colors.

I take a whiff and get an odd, not-quite identifiable aroma from this hybrid beer. It smells oddly juicy.

It’s from Dogfish Head and is called Red & White. It’s an oak-aged imperial wit brewed with grape must, and it weighs in at a hefty 10 percent.

Must is the first step in winemaking – it is the juiced press from the skin, seeds and stems of the grapes. Ha! That explains the juicy smell. I just could not identify the juice, and my nose would certainly know grape juice. This is different.

I want to like this weird beer, but right now I wish I hadn’t tackled this bomber of 10-percent ale on my own. It’s meant to be shared (because then I wouldn’t have to drink so much of it).

There’s something shandyish about it, but not in a way I like. It’s more in the chemically created Fruity Pebbles-like flavor of a Leinie’s shandy.

The heady fizziness I mentioned earlier has completely dissipated, making this suddenly look more like a still wine than a beer.

Each sip makes me cringe and shake my head at the horror of the clash of flavors. It’s the back-end juiciness that really triggers the cringe. My shoulders draw up and I try to retract my head like a turtle. I know there is beer in there somewhere, but I’m not finding it.

I like to experiment. I like weird flavors and combinations. But this one just doesn’t do it for me. It reminds me of a failed homebrew project I had once back in the day. Can’t recall if it was mine or someone else’s. Probably mine.

And the dry, sharp aftertaste of Red & White reminds me just a little of the nasty aftereffects of vomitus.

On that sickly note, I probably should call it a night.