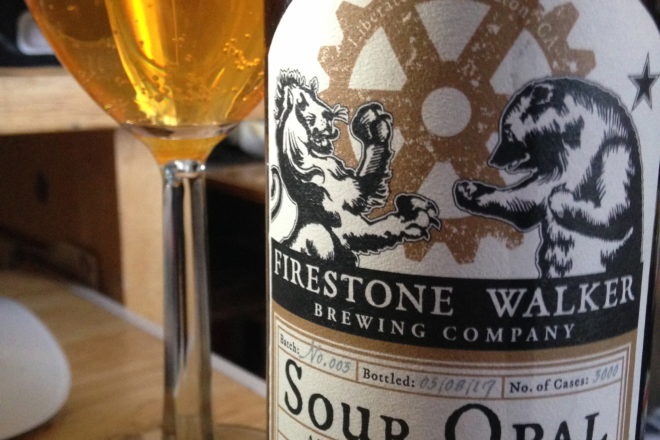 A blast of barnyard funk was unleashed like a mad genie when I thumbed the cork out of this bottle of Sour Opal, an American Wild Ale from the Barrelworks series by the Firestone Walker Brewing Co. of Buellton, Calif.

Yowzer, this is one sour ale!

It pours translucent gold and releases champagne-like bubbles from the bottom of the glass, yet doesn’t taste particularly effervescent.

It’s based on Belgian Gueuze, which is a combination of young and old ales that have matured and been “infected” by oak casks.

The label tells us we will be assaulted by aromas of “coconut, Tahitian vanilla, hints of apricot, along with a dark-toasted nutty malt flavor. Ocean mist and gusts of bright citrus swirl on the palate…”

I completely missed the ocean mist, and as far as the Tahitian vanilla, well, I would have sworn it was Madagascan vanilla. Hee, hee…

Thanks a bunch to Chris Roedl for turning me on to this fine sour. 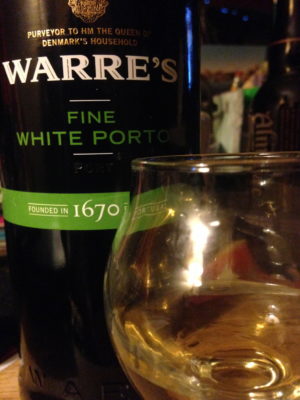 I’m going to switch things up after recently discovering a beverage I had avoided these many years because of one bad experience.

I must have been 15 the first and last time I had white port, a shot offered to me by a friendly Bowery bum as I walked home from school in beautiful downtown Duluth.

Being a polite kid, I took the offered shot from a pint bottle, but noticing the bum’s crusty, white-flecked lips, I tried to take a sip from the bottle with as little contact with the glass as possible.

The liquid was sickly sweet with an alcohol burn finish.

That one taste put me off white port all these years. Red port, yes!

Tonight I decided to give white port another try, and, WOW!

I picked up a bottle of Warre’s Fine White Port, largely because I enjoy both the Warre’s Tawny and regular Port.

The sweetness I braced myself for is tempered by a fresh green apple flavor that ends in a warm alcohol embrace. Turns out I love white port. Might even want to try a gin and white port, which, I hear, is a lighter version of gin and tonic.

Yummy! Wish I could give that rummy old bum a sip of the stuff. Change his life! But, of course, the bum is as long gone as Duluth’s Bowery. But here’s to that friendly bum’s memory.