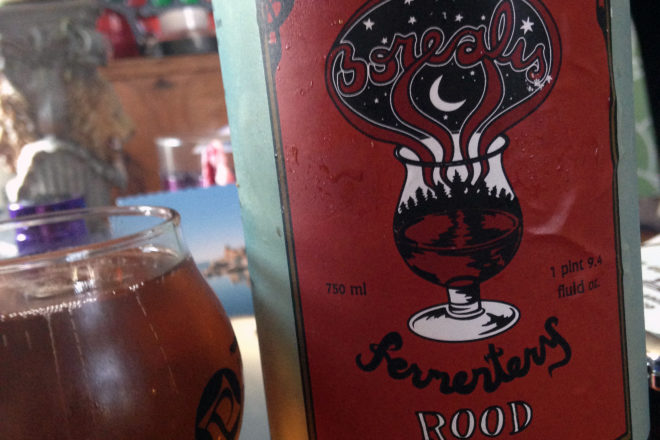 Baffled by a seemingly unreadable label on a bomber bottle, I overrode my initial reaction to just walk away from it and pulled on a pair of cheaters to see if I could decipher the label.

In a small, shaky script, I made out the name of the brewery – Borealis Fermentery of Knife River, Minn., a blink of a community on Lake Superior’s North Shore that I recall from my youth as an excellent place to net smelt.

I look up the website and learn that Borealis brews Belgian-style inspired ales. The bottle I have is Rood Tart Red Ale, which the brewery describes as a winter beer. Well, I did not know that when I cracked open the bottle on one of the steamiest days of summer.

At first, fresh out of the magic fridge, it’s a very subdued sour, and quite refreshing on this icky, sticky day. But the sourness ratchets up with vinegary intensity as the beer warms, it feels like a sour punch on the tongue that almost sends me reeling with each sip. Yowzer!

Brewmaster/owner Ken Thiemann, a Yooper with a degree in civil engineering from Michigan Tech, built his timber-frame straw bale brewery by himself – meaning with his own hands. It opened in 2012, and I’m just hearing about it in 2017.

Looking at the label again, I really have to wonder what made me stop to decipher this bottle of beer. Not counting black and white, two colors are used – brown (which I think is supposed to be closer to red) on pale army green. They are not colors that make you think beer, especially that awful green, which makes me think of army worms.

I can see the elements of a great design for this label, however, apologies to Ken, this is one of the worst beer labels I have ever seen. I would beef up that Borealis logo wafting out of the snifter (or perhaps make Borealis Fermentery the neck label), find a more readable typeface for Fermentery, and make the beer name much more visible than its present 24-point type.

Ultimately, it’s what’s in the bottle that counts. I know I’ll be making a trip to Knife River in the near future.