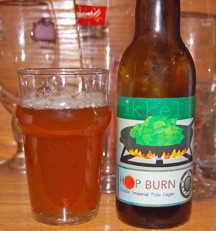 I find most hop-centric beers to be a trendy waste of time, but one beer with “hop” in its title has been taunting me from the shelves for several months now. It’s Mikkeller’s Hop Burn Double Imperial Pale Lager.

Mikkeller’s is a Danish brewery that has taken adventures in hops to another level. It does a single hop series, applying a different hop variety to the same base ale (I tried two of those – with Mt. Hood and Tettnanger hop varieties – in the Aug. 23, 2013, Pulse).

Hop Burn is a Mikkeller’s series that comes in degrees of hop burn. As indicated by a dial on the label, this lager is a Lo Burn series entry.

The Double Imperial Lager is a 10 percent copper-colored lager that doesn’t hold much of a head. The flavor is subtly hopped up with floral, herbal and citrusy notes that infuse the malt rather than overpowering it. I guess now I’ll have to track down one of the Hi Burn series. 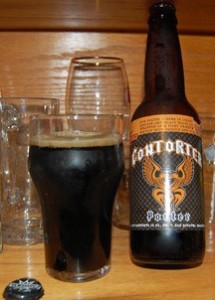 Ale Asylum’s weird biker-chic/metalhead tattoo label style doesn’t do much for me, but feeling like drinking something on the richer side recently, I picked up a sixer of Ale Asylum’s Contorter Porter.

It comes on with a big splurge of biscuit and smoky dark chocolate, and then finishes on a strangely thin and astringent note. I can imagine a London laborer of the late 18th or early 19th century popping into his local after work and asking that a pint o’ porter be pulled, and finding something like this Contorter Porter in his tankard.

I found that it pairs beautifully with chocolate.