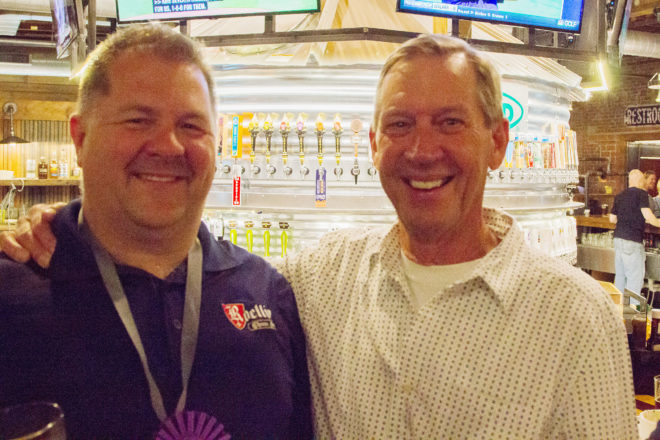 This year’s competition had a record number of entries: 1,843 cheeses and cultured dairy products. Winning a ribbon in any of the different classes is very difficult and it can be a life/career-changing event for a cheesemaker.

I was sitting in the audience next to Chris, his wife Kristine, and several other Wisconsin cheesemakers during the award ceremony. As usual everyone was very nervous as the various awards were announced. The category that Little Mountain was entered in was “Open Category-Washed Rind Cheeses Aged More Than 60 Days,” the third from last of more than 107 categories, meaning Chris sat through over an hour as they announced winners in each class.

When his name was called he jumped out of his seat, shaking his head with joy, trying to comprehend what just happened. After all the winners of each category are announced, the lights dim and the tension builds in anticipation of the big announcement of the three finalists for Best of Show. The judges take all the first place winners in each class of cheese, and choose the champion. The third place winner was a tie: Jeff’s Select Gouda from Wisconsin and Greensward, a Vermont cheese. Second place was also a tie: Buff Blue from California, and St. Malachi Reserve from Pennsylvania. When the first place winner was announced, Chris shot up, raised his arms, let out a hoot then was overcome with emotion. What a great sight to see for a well deserving champion.

Do you think any of the Wisconsin contingent of cheesemakers and friends went on to party that night with Chris? (Hint: cheesemakers love to drink beer.) You bet we did, well into the wee hours of the night.

Chris, a fourth generation cheesemaker from Shullsburg, Wis. developed this award-winning cheese in honor of his Swiss heritage in cheesemaking. Although Chris is best known for his fantastic cave aged cheddar blues, Dunbarton Blue and Red Rock, Little Mountain is his newest creation.

Winning a Best of Show award is similar to an actor winning an Oscar in the film business. His cheese, Little Mountain, is deemed the best cheese in America, and now sought after by every cheese retailer, wholesaler and cheese enthusiast in the country.

Besides the fact that this is great cheese, the best part for me is that Chris and his team at Roelli Cheese Haus are down-to-earth, super people. I met Chris when he first started in the artisan cheesemaking business. Over the years Chris, his wife Kristine, and their two children, Reagan and Cole, have become good friends of ours. We have seen all the hard work they have put into making a name for themselves in a highly competitive industry.

Chris’ great grandfather came to America from Switzerland in the early 1900s and began making cheese in southern Wisconsin. The early roots of the company were making cheddar. Over time it became very difficult for a small cheese plant to compete with the mega cheese factories that were being built in the late 1970s and early ‘80s.

In 1991, Roelli Cheese, like so many other cheese plants in Wisconsin, closed their doors because they just could not make a living. The Roellis closed the cheese plant, sold all the equipment, and concentrated their efforts on the milk hauling business. Chris drove a truck, hauling milk for several years after they closed the cheese factory. He really wanted to re-enter the cheese business, this time making special recipe, hand-crafted, artisan cheese, but he fought an uphill battle trying to convince his father and uncle to get back in the cheesemaking business. In 2006 Chris finally talked his family into it and he began making some very unique, shelf-cured cheeses.

His journey with Little Mountain began three years ago as a tribute to his Swiss heritage. This very special cheese is styled after an Appenzeller-style cheese, famous in the Alps of Switzerland. Made with heat-treated milk and cellar cured in 15-pound wheels, this cheese is hand washed with a special cocktail of bacteria and brine, and aged for eight to 15 months. The cheese has a firm texture, with a sweet and nutty flavor.

Wisconsin is king of the hill again. As usual in these judging competitions, Wisconsin won the most number of ribbons, winning 104 awards. California came in second with 55 ribbons, followed by Vermont with 36.