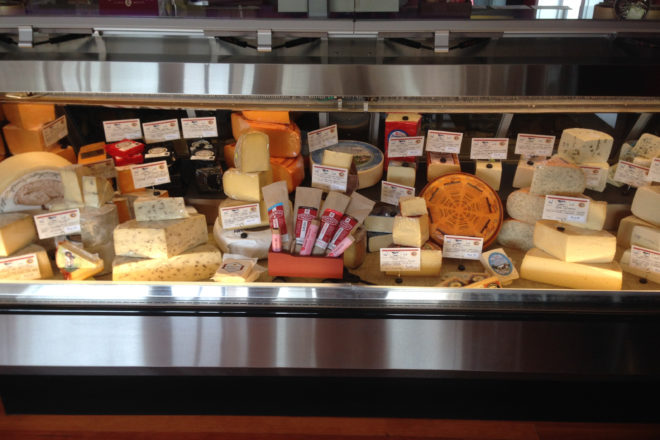 Finally, winter has finally let go of its grip and spring has arrived. I was very busy over the winter, visiting cheesemakers throughout the state, something I don’t have as much time to do in the busy summer season.

We are now busy stocking our store in Egg Harbor with the bounty of great cheeses of Wisconsin. This year marks our sixth season and we are very excited about some of the new cheeses we have been bringing in this year. It is always an exciting project, choosing which cheeses we carry in our cheese case. This year was no exception.

Every year, there are national and international cheese contests held in the U.S. where the leading cheesemakers show off their wares, hoping to win a medal or ribbon. The contests range from county and state fairs to national contests such as the U.S. Cheese Championship, The American Cheese Society, and an international competition, the World Cheese Championship (held every other year).

Over the past several years, Wisconsin has been a dominant force, racking up more ribbons/medals than any other state or country, especially since the world of specialty and artisan cheese has become such an important segment of the cheese industry.

The World Cheese Championship was held in Madison in early March and had a record 2,948 entries from 23 countries and 31 states. The 48 judges from 16 different countries are the ones that make the difficult decisions to choose the winners in each category of cheese using a point system. Then the 16 cheeses with the highest total score are “re-judged” and a winner is chosen.

When the winner of this year’s contest was announced there was an eruption of applause. Roth Grand Cru Surchoix, made in Monroe, Wisconsin, was named the Grand Champion. It had been 28 years since a cheese made in the United States had won this competition. The Swiss, Dutch and French cheesemakers have dominated this contest for many years. Having a cheese from Wisconsin is a big feather in our cap, earned through hard work and determination.

Roth Grand Cru Surchoix is a wash rind Alpine-style cheese. This cheese is aged a minimum of nine months to create a firm texture and complex flavors of caramel, fruit and mushroom. Needless to say, this cheese has become nearly impossible to purchase now because every cheese shop in North America and Europe wants to have it. I have been assured by our distributor that we will be able to get at least two wheels of this very special cheese.

We are very proud of many of our other cheesemakers for their accomplishments in this prestigious competition, including:

There were many other ribbons won by Wisconsin cheesemakers we deal with, too many to list here. We congratulate them all for their efforts, all well deserving.

I encourage any cheese lover, especially those living or visiting here in Wisconsin, to try some of the great cheeses made right here in our backyard.