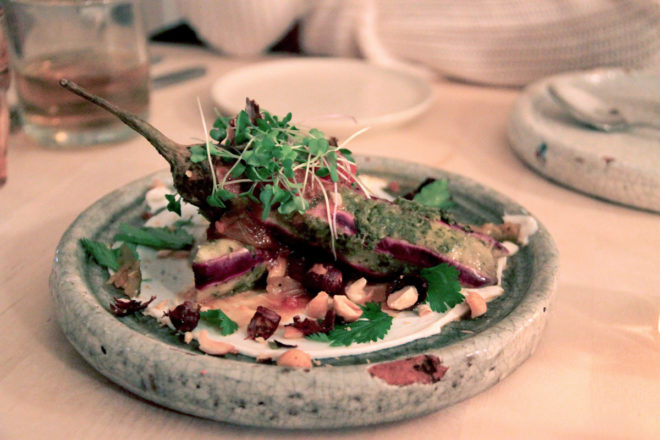 The Roasted Eggplant, a new addition for the winter menu at Trixie’s. Photo by Aleah Kidd.

As seasons change, so do menus, and Trixie’s new winter menu highlights the spice-infused, Asian-influenced approach of their head chef, Mitzi Tompkins. It’s an exciting moment for Tompkins, who will be celebrating two years with Trixie’s, having gone from sous chef to head chef, a role she stepped into this past summer.

The menu, which was introduced the week before Thanksgiving, uses a fusion approach to create a new variety of dishes that pairs familiar ingredients with new flavor profiles. Take, for example, the Tempura-Battered Whitefish. The not-uncommon ingredient of local whitefish is used, but here you’ll find it tempura-battered alongside fermented cabbage and shiitake mushrooms with a Sichuan-spiced relish and Sriracha caviar.

“My cooking is often a combination of tropical and Asian flavors, from my experience growing up in Hawaii and traveling throughout Asia,” said Tompkins. “It’s a combination you can’t find elsewhere in Door County.”

Aside from drawing on her Pacific and international cooking experiences, her goal as head chef is to find ways to make food both taste good and make diners feel good.

You won’t notice if you aren’t paying attention, but the menu is very vegetarian friendly, using plant-based creams and flavorings where you’d normally expect dairy. It’s an Ayurvedic-style cooking which lends itself to being more flavorful and nourishing, without making you feel like you need to take a nap afterwards.

Spices play a big role in this style of cooking. Spices are used to add health benefits and enhance dishes without weighing them down. For example, turmeric and garlic are used to build complexity while also warming you from the inside out.

“I want my food to have depth, and I like to use spice to enhance depth. Not necessarily ‘hot spice,’ but a mixture of sweet and spicy,” explained Tompkins.

This is evident in a new menu item, Kitchari, which is a traditional recipe of cooked lentils, rice and spices – a staple recipe of Ayurvedic diets. The version Tompkins has created for the winter menu includes a spiced mixture of mung beans, lentils, basmati rice and quinoa with house-made naan and raita sauce for drizzling and dipping. It’s a comforting food that isn’t overly bold on spice, instead being complex in taste and providing a porridge-like texture.

Texture is also key to a lot of Tompkins’ dishes. With the right combination of spice and texture, she is able to transform ingredients into something unexpected and new, even though the ingredients are familiar. This phenomenon can be frequently experienced on nights where there are specials offered in addition to the menu: Wednesday evenings’ Pasta Night and Friday evenings’ Asian Cuisine Night.

“The nights we have specials lets us keep thinking creatively. We are usually putting together our specials for the menu the night before and using what we have in the kitchen in a new and interesting way,” said Tompkins.

The “we” she is referring to is the current team responsible for menu creation, including owner Mike Holmes and sous chef Madison Feneli. The three work together weekly to bring new specials to the table that will surprise and impress frequent diners. “Creating the specials is a really collaborative process between Mike, Madison and myself,” said Tompkins.

“Our goal is to provide those unique flavors that we are all craving, but you can’t find here in Door County,” said Holmes.

The trio pulls from a toolbox of Wisconsin-sourced ingredients, relying on local growers such as Waseda Farms, Hidden Acres and Cold Climate Farms. The kitchen staff challenges themselves to think outside the box in order to carry the in-season ingredients into the rest of the year through fermenting, dehydrating and pickling ingredients. Right now they are experimenting with ways to preserve seasonal chestnuts and cranberries in order to include them on their spring menu.

What hasn’t changed with the season is Trixie’s focus on being female-forward. The wine list is a place where this concept shines – the wine list purposely highlights wines that are produced by female winemakers, and also incorporating many biodynamic, organic and sustainable wine options.

The winter season wraps up in mid-February, but not before they host a Valentine’s special event, and hope to see the many supportive faces of the community they have come to know this year. Details are not yet defined, but Tompkins is already brainstorming. “I’m a very themed person, I just love the colors and working with a theme, I can’t help myself. There will be hearts and something red!”

After Valentine’s Day, the restaurant will be closed until spring, with an estimate of an April reopening. Now through February 14, diners can eat and sip at Trixie’s Wednesday through Saturday from 4:30 to 9 pm.

When dining at Trixie’s, guests are presented with with a nibble of candied fennel at the end of the meal in place of the after-dinner mint. It’s a refreshing and sweet palate cleanser. Here’s how you can make your own at home.

In a small saucepan stir together sugar and water until it becomes syrupy and bubbly, around two to three minutes. Add fennel and stir continuously until the mixture crystallizes. When the mixture looks dry, remove from heat and stir until fennel seeds are separated. Use as an after-dinner digestif and palate cleanser.