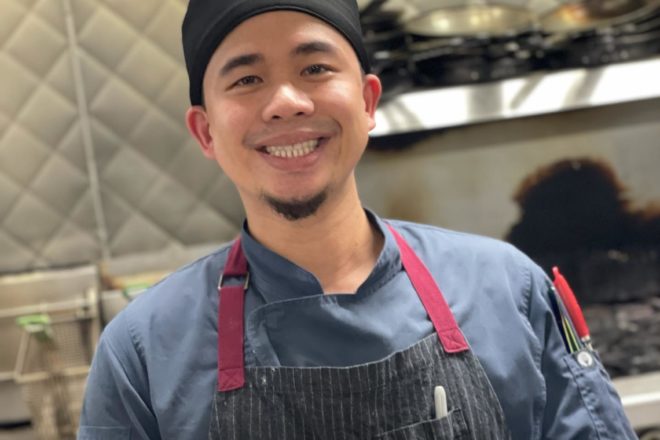 Stepping into any new kitchen can be a nerve-wracking experience for a chef. And doing so in a completely different part of the country in the middle of a pandemic definitely kicks the pressure up a notch. Add to the mix an establishment that’s steeped in tradition and part of decades’ worth of tourists’ – and locals’ – memories? Even Gordon Ramsay might crack under that kind of heat.

But not Bernard Beronio. Originally from Palm Springs, California, he and his wife relocated to Door County, following family members who had moved here a few years earlier. In 2020, when the opportunity to be the chef at The Mill Supper Club opened up, Beronio didn’t think twice, despite the current menu contrasting his training in French cuisine and dishes from his Filipino heritage.

He said the slower pace of the restaurant scene during the pandemic actually worked to his advantage, giving him time to think carefully about how to introduce some of the dishes he was more familiar with preparing to a presumably unfamiliar audience.

“When I first started, I was told they have a lot of regulars who grew up with the traditions of the broasted-chicken dinners and fish fries,” Beronio said. “I don’t want to destroy that memory, so I’ve kept that on the menu for the regulars.”

But to slowly introduce his own cooking style – and test the waters for which dishes might gain a following – he started serving weekend features.

“I would let them try something different from my Filipino heritage, or maybe something from South American or Cajun cuisine,” Beronio said. “I started by just playing around with the vegetables, adding sauces or fruits and nuts. And my favorite vegetable to work with is Brussels sprouts. I fry them up Cajun style, or I’ve done them with a Thai peanut sauce.”

As Beronio grew the featured dishes – and noticed them selling out and people coming back to order more – “I wrote them into the menu,” he said.

His approach to introducing new menu items was to give a slight twist to a tried-and-true favorite entrée. Take his Cajun pistachio-crusted walleye, for example.

“When I got here, I tried the walleye because in California we use different fish,” Beronio said. “I immediately thought this was one I could do a different twist on.”

“I can do many variations on [seafood] with sides, purées or sauces,” he said.

Beronio gets his inspiration from a substantial personal cookbook collection as well as nostalgia.

“If I look at an ingredient and it sparks a memory or a feeling, I think I want to bring that same feeling or memory I get to someone else,” he said.

For that reason, although the broasted chicken and Friday fish fries will remain sacred, he does plan to introduce guests to some Filipino cuisine, including noodle dishes and egg rolls – but with slight Door County twists.

“I’ve created my own version of a few of my favorite noodle dishes,” Beronio said. “I Americanized it in a way by adding thick-cut bacon and mushrooms.”

The kitchen at The Mill Supper Club has become a form of continuing education, giving him the creative freedom to not only grow as a chef, but also to expand the palate of his customers.

“When I finished culinary school, I wanted to keep learning and progressing and keep that creativity going,” Beronio said. “I took the dive here and have received 100% support, so we’ll keep trying.”